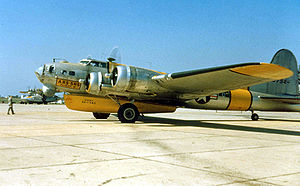 A Boeing SB-17G, an air-sea rescue aircraft modified to carry the A-1 lifeboat rigged underneath

Air-sea rescue by flying boat or floatplane was a method used by various nations before World War II to pick up aviators or sailors who were struggling in the water.[2] Training and weather accidents could require an aircrew to be pulled from the water, and these two types of seaplane were occasionally used for that purpose. The limitation was that if the water's surface were too rough, the aircraft would not be able to land. The most that could be done was to drop emergency supplies to the survivors.

The first air-dropped lifeboat was British, a 32-foot (10 m) wooden canoe-shaped model designed in 1943 by Uffa Fox to be dropped by Avro Lancaster heavy bombers for the rescue of aircrew downed in the Channel.[3] The lifeboat was dropped from a height of 700 feet (210 m), and its descent to the water was slowed by parachutes. It was balanced so that it would right itself if it overturned—all subsequent airborne lifeboats were given this feature.

Fox's airborne lifeboat weighed 1,700 pounds (770 kg) and included two 4-horsepower (3 kW) motors augmented by a mast and sails,[4] along with an instruction book to teach aircrew the rudiments of sailing. The lifeboats were first carried by Lockheed Hudson aircraft in February 1943.[4] Later, Vickers Warwick bombers carried them. The Fox boats successfully saved downed aircrew as well as glider infantrymen dropped in the water during Operation Market-Garden.

In early 1953, Saunders-Roe at Anglesey completed the Mark 3 airborne lifeboat to be fitted underneath the Avro Shackleton maritime reconnaissance aircraft. The Mark 3 was made entirely of aluminium unlike the Fox Mark 1 which was made of wood. Dropped from a height of 700 feet (210 m), the Mark 3 descended under four 42-foot (13 m) parachutes at a rate of 20 feet (6 m) per second into the rescue zone. As the lifeboat dropped, pressurized bottles of carbon dioxide inflated the self-righting chambers at the bow and stern. Upon touching the water, the parachutes were released to blow away, and a drogue opened to slow the boat's drift and aid in the survivors reaching the lifeboat. At the same time, two rockets fired, one to each side, sending out floating lines to provide easier access to the lifeboat for ditched airmen. Doors that opened from the outside provided access to the interior, and the flat deck was made to be self-draining. The craft was powered by a Vincent Motorcycles HRD T5 15-horsepower (11 kW) engine with enough fuel to give a range of 1,250 miles (2,010 km). Sails and a fishing kit were provided, as well as an awning and screen to protect against sun and sea spray. The Mark 3 measured 31 feet (9 m) from bow to stern and 7 feet (2 m) across the beam and held enough to supply 10 people with food and water for 14 days. It carried protective suits, inflatable pillows, sleeping bags, and a first-aid kit.[5]

In the United States, Andrew Higgins evaluated the Fox boat and found it too weak to survive mishap in emergency operations. In November 1943, Higgins assigned engineers from his company to make a sturdier version with two engines.[3] Higgins Industries, known for making landing craft (LCVP) and PT boats, produced the A-1 lifeboat, a 1½-ton (1400 kg), 27-foot (8 m) airborne lifeboat with waterproof internal compartments so that it would not sink if swamped or overturned. Intended to be dropped by modified Boeing B-17 Flying Fortresses, it was ready for production in early 1944.[6]

File:Boeing SB-29.jpg
An SB-29 "Super Dumbo", a variant of the B-29 Superfortress, with an air-droppable EDO A-3 lifeboat rigged underneath
Main article: A-3 lifeboat

The A-3 lifeboat was an airborne lifeboat developed by the EDO Corporation in 1947 for the United States Air Force (USAF) as a successor to the A-1 lifeboat.[7] It was built of aluminum alloy to be carried by the SB-29 Super Dumbo. Various B-29s served air-sea rescue duties on a rotating basis toward the end of the Pacific War, and after the war 16 were converted to carry the A-3 lifeboat.[7] The SB-29 served until the mid-1950s.[7] Approximately 100 of the EDO lifeboats were built but very few rescues were attributed to them.