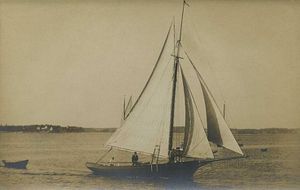 The Friendship sloop is a style of gaff-rigged sloop that originated in Friendship, Maine around 1880. Fishermen in Friendship and neighboring Bremen collectively originated the design, one influenced by the fishing sailboats of Gloucester, Massachusetts, particularly the schooner Fredonia of 1889. The Friendship sloop was the dominant style of fishing boat, especially for lobstering, off the coast of Maine until the introduction of the gasoline engine early in the 20th century. Friendship-area boat builder Wilbur A. Morse produced many examples from the 1880s to the 1910s. Modern reproductions, both wooden and fiberglass, remain popular among enthusiasts.

Friendship sloops are not identical in size or shape, but they share a common design and appear similar. All are gaff-rigged, with a mainsail, a staysail and normally a jib. They may additionally have a topmast with a main topsail and jib topsail (flying jib). They all have a full keel, an elliptical stern and a bowsprit. They can range from 21' to 50' but most are between 25' and 31' in length (on deck).