From SpottingWorld, the Hub for the SpottingWorld network...
Jump to:navigation, search
For other ships of the same name, see HMS Hindustan.

HMS Hindostan (later variously Hindustan) was a 56-gun Fourth Rate ship of the line of the Royal Navy. She was originally the East Indiaman Hindostan that the Admiralty bought in 1795. She is known for two events, her voyage to China between 1792 and 1794 when she carried Lord George Macartney on a special embassy to China, and her loss in a fire at sea in 1804. 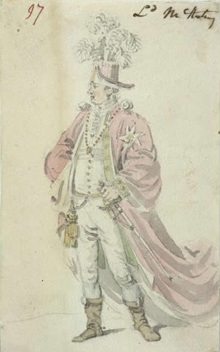 William Barnard of Deptford launched her on 3 November 1789 as Hindostan for her managing owner Robert Williams, M.P. From 17 January 1790 to 29 June 1791, under Captain William Mackintosh she made one round trip for the East India Company to China. The British Government then chartered her to take Lord Macartney to China in an unsuccessful attempt to open diplomatic and commercial relations with the Chinese empire. The voyage lasted from 1 October 1792 to 30 September 1794.[1] The Hindostan traveled in the company of the 64-gun HMS Lion under Captain Sir Erasmus Gower, and the brig Jackall.

Part of the remuneration of the captain of an Indiaman was the right to carry up to some 50 tons of cargo for his own account. Mackintosh managed to conduct private trade in Guangzhou from the voyage amounting to £7,480. The total private trade on Hindostan amounted to £9,633.[2]

The Admiralty bought Hindostan on 9 March 1795. Barnard fitted her for service with the Royal Navy at a cost of ₤11,062. In April, Captain Robert Moorsom commissioned her for service in the North Sea. Captain Thomas Bertie took command in November and sailed for Jamaica on 24 February 1796. In the West Indies she participated in the operations against San Domingo. Captain Francis Collingswood took command in October 1796. She returned to England and was paid off in August 1797. She served for a year until June 1798 as a guardship at Plymouth.

In December Captain Joshua Mulock commissioned as a 28-gun storeship for Cork. At this time she gave up her Lower Deck guns. She sailed for the Mediterranean ion 18 January 1800. On 20 May, Hindostan and Pearl captured of the Ragusan ship the El Veloce and its cargo of luxury goods while it was sailing from Marseilles to the Barbary coast. His Serene Highness Mustapha Bashaw, Dey of Algiers and named Algerian owners of the ship claimed the vessel and cargo. After the Vice-Admiralty court in Minorca had ruled the vessel and its cargo a prize the case went to appeal in England.

She refitted at Deptford between November 1800 and January 1801 (for ₤10,292) before sailing for the Cape of Good Hope. By 6 May 1801 she was a storeship again, and under Captain Samuel Mottley. In December Lieutenant William Fothergill took command. Then in 1804 Captain John Le Gros replaced him.

In 1804 the Hindustan was despatched to carry supplies to Horatio Nelson, who was at the time Commander-in-chief of the Mediterranean fleet.

Arriving at Gibraltar in March, she sailed from there to join Nelson off Toulon in company with the frigate HMS Phoebe, but became separated from the Phoebe during a gale in the Gulf of Lyons.

On the morning of 2 April, while about 30 miles to the south-east of Cape St. Sebastian, thick smoke was seen coming from the fore and main hatchways. Attempts were made to find the source of the fire but no flames could be discovered. Orders were given to throw the ship's gunpowder overboard and an unsuccessful attempt was made to flood the magazine.

After struggling to fight the fire for about 7 hours, but when they were still 15 miles (24 km) from shore flames suddenly erupted from the hatchways. The crew was able to run her aground in Rosas Bay, about a mile from the Fort of Ampurius and the Church of Saint Peter.[3]. By the time the ship was beached, about 1 mile (1.6 km) from the shore, she was completely aflame. Local vessels were initially afraid to approach too closely, but using the ship's own boats and an improvised raft, the ship's passengers and crew were saved shortly before the ship blew up.

Spanish launches ferried survivors from the ships boats to the shore. The order of rescue was women and children, ships crew, officers, and the captain. The evacuation was orderly and no more than three men were lost of her 259 people on board, including passengers.,ref name=Gossett/>

On 19 April a court martial on board Royal Sovereign honourably acquitted Capt. Le Gros, his officers, and the ship's company. The board praised Le Gros for smothering the fire despite being at such a distance from the shore and thus helping her crew and passengers escape with their lives. Nelson himself remarked that the preservation of the crew seemed little short of a miracle. The board recommended Hindostan's acting lieutenant, Thomas Banks, to Nelson for promotion for his conduct during the wreck; his promotion to lieutenant was confirmed on 23 June 1804.

The cause of the fire was much debated. It was suggested that the fire may have been due to spontaneous combustion of hemp cordage or sails being stored when not completely dry. Nelson later wrote of the incident, "the fire must have originated from medicine chests breaking down or from wet getting down which causes things to heat. I have never read such a journal of exertions in my whole life."[3]