The vessel is currently used by Sea Launch for equatorial Pacific Ocean launches. She works in concert with the assembly and control shipSea Launch Commander. Her home port is the Port of Long Beach in the United States.

In her current form, Ocean Odyssey is 436 feet (133 m) long and about 220 feet (67 m) wide, with an empty draft displacement of 30,000 tons, and a submerged draft displacement of 50,600 tons. The vessel has accommodations for 68 crew and launch system personnel — including living, dining, medical and recreation facilities. A large, environmentally-controlled hangar stores the rocket during transit and then rolls it out and erects it prior to fueling and launch. 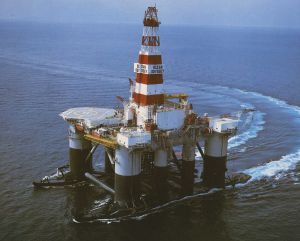 The platform was built in 1982 for Ocean Drilling & Exploration Company (ODECO) by Sumitomo Heavy Industries. It drilled its first exploratory hole about 40 miles (64 km) south of Yakutat for ARCO Alaska, Inc. The rig cost about US$110 million to build during the early eighties oil "boom".

During construction the vessel was called Ocean Ranger II, and was renamed Ocean Odyssey after the Ocean Ranger capsized with all hands lost during a storm off Newfoundland on February 15, 1982.

The rig had other advanced extreme-condition features as well. For example, the rig's columns were strengthened to withstand some ice impact and the marine riser had a feature similar to a cow-catcher to keep floating ice off the marine riser that connected the rig to the well on the ocean bottom.[citation needed]

On September 22, 1988, she suffered a blowout while under hire to ARCO, drilling the 22/30b-3 well on a prospect in the North Sea.[1] The ultimate direct cause of the incident was a failure of the subsea wellhead equipment after a prolonged period of well control.[2] During the resulting fire the radio operator, Timothy Williams, was killed. He had been ordered from the lifeboats and back to the radio room by the rig's manager, who failed to countermand the order when the rig was evacuated.

Ocean Odyssey spent the next several years as a rusting hulk looming over Dundee's docks. Her availability prompted Boeing to establish the Sea Launch consortium, for which she was bought by Kværner Rosenberg of Stavanger, Norway, and rebuilt in 1995-1997.

From late 1995 to May 1997, Kværner extended the length of the platform and added a pair of support columns and additional propulsion systems. The upper deck — the location of the former drill floor — was rebuilt to accommodate the launch pad and launch vehicle service hangar. In May 1997, Ocean Odyssey arrived at Kværner Vyborg Shipyard for the installation of the launch vehicle equipment itself.

File:SeaLaunch-Odyssey.jpg
Ocean Odyssey at port, with Sea Launch Commander behind

On January 30, 2007, a Zenit rocket carrying the NSS-8 satellite failed to launch and exploded aboard Ocean Odyssey. There were no injuries. The launch platform damage was mostly superficial, though blast deflectors underneath the launch platform were knocked loose and were lost when they fell into the sea.

Ocean Odyssey returned to service with the January 15, 2008, successful launch of the Thuraya 3 satellite.[3]