The SS Bokhara was a P&O steamship which sank in a typhoon on 10 October 1892, off the coast of Sand Island in the Pescadores, Formosa. Of the 125 people who perished, eleven were members of the Hong Kong cricket team.

Hong Kong's cricket team had played an Interport cricket match against Shanghai at the Shanghai Cricket Club on 3 October 1892 and were returning home on the SS Bokhara.

Launched on 18 December 1872, the SS Bokhara had a two cylinder compound inverted steam engine and was registered in London. The passenger liner travelled mainly to India and the Far East and in 1875 had its registry transferred to Greenock. On the ship's maiden voyage, in 1873, it was stranded on an uncharted rock off Hong Kong and after eventually refloating, it had to be docked at Kowloon for repairs. In 1884 the ship was used as a transport vessel for soldiers in the Mahdist War. [1]

The ship set off from Shanghai on 8 October, due to arrive at Hong Kong on the 11th and was then bound for Colombo and Bombay. On board were 148 people, as well as silk, tea and general cargo to the weight of 150 tons.

A typhoon struck on the 9th of October and the crew battened down the hatches, furled the sails and set the engines to dead slow in an attempt to stop the ship from being battered against the coast of Formosa. It worsened on the 10th and the lifeboats were blown away into the Taiwan Straits by the strong winds as were the deck fittings of the Bokhara. By nightfall, waves had swept over the ship, shattering the engine room skylights and flooding the machinery.

With the Bokhara approaching the Pescadores, the engineers tried in vain to restart the swamped engines while the captain warned the passengers of the oncoming collision. Soon after, the ship struck the reef twice, with the second strike causing the starboard side to be ripped wide open and within two minutes the Bokhara had sunk.[2]

The survivors, who lay injured on the beach, were found by local Chinese fishermen who brandished axes and knives. After salvaging bits and pieces from the wreckage, the fishermen then took the survivors to Peihou Island followed by Makung, where they were looked after by the locals. They were then picked up by the Douglas Steamer Thales, who transferred the survivors to HMS Porpoise which was heading to Hong Kong.

Only two Hong Kong cricketers survived, Dr James Lowson and Lieutenant Markham. Lowson had to have a lung removed but continued to play cricket for Hong Kong until 1898. First-class cricketer Ernest Coxon and future Hampshire player Horatio Dumbleton both played in Hong Kong's interport match against Shanghai earlier that year but were, fortunately for them, unable to play in the October fixture.

A further 23 people were saved from the water, including the Chief Officer, Third and Fourth Officers and two European Quartermasters. The other 18 survivors were Asian passengers and soldiers. 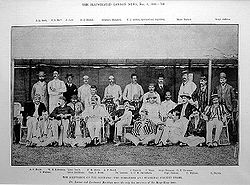 Hong Kong and Shanghai's cricket teams pose for a photograth

The eleven Hong Kong cricketers to die were -

A Marine Board of Inquiry was launched but after only two days of testimony found that accident was not caused by the wrongful act or default of any Certified Officer and commended the crew on their efforts to avoid the tragedy.

With the Hong Kong cricket community in mourning, the Interport series did not resume until 1897.

Sand Island in the Pescadores, where the ship sank, is now a shooting range for the Taiwanese Military.