The Paris was a French ocean liner built in Saint-Nazaire, France for the Compagnie Générale Transatlantique. The French Line's Paris was built by Chantiers de l'Atlantique of St. Nazaire. Although the Paris was laid down in 1913, her launching was delayed until 1916 and she was not completed until 1921, due to World War I. When the Paris finally completed, she was the largest liner under the French flag, at 34,569 tons. [1] 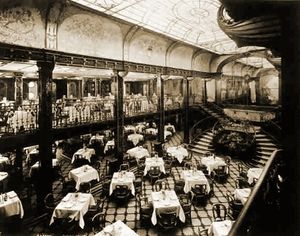 The magnificent first-class dinning room aboard the Paris

The Paris's interior reflected the transitional period of the early twenties, between the earlier preferred Jacobean, Tudor, Baroque, and Palladian themes in favor of the sleekness and simplicity of her Art Deco arrangements. The Paris had something of a magic touch, with every possible kind of interior. Passengers could choose to travel in the standard conservative palatial cabins, but the ship also featured Art Nouveau and hints of the Art Deco that the Ile de France would boast six years later.[2]

The luxury of the Paris was something no other liner could claim to have. For starters, most first class staterooms had square windows rather than the usual round portholes. In a first class cabin you were able to have a private telephone, which was extremely rare on board a ship. A valet on the Paris could be easy to summon in his adjacent room, rather than in a cabin in the second class, uncomfortably far away.

The oil-fired turbine emerged during the twenties, replacing the pre-war coal system and allowing tidy, near polished perfection in the engine rooms. Finally, interested passengers who were very often gentlemen aboard could be invited below decks by the chief engineer for a tour of the machinery. The very core the ship's energy system impressed these onlookers, such as that in board the Paris, where the 34,000-ton liner could be driven at 21 knots with over 2,500 souls hardly feeling the effort. French ships quickly became known as the aristocrats of the ocean, and were very successful. The Paris served in a partnership with her "sister" ship France, making travel between the United States and France a legendary experience.

File:Ss paris stairs.jpg
The grand staircase aboard the Paris gives a good idea of her luxurious Art Nouveau interior.

Dining on the Paris was excellent, her service was superb, and the living spaces were divinely comfortable and luxurious.[3] French Line ships had enormous appeal in the twenties-"Floating bits of France itself", as one brochure aptly stated. Service and accommodation were fine but the cuisine was its most outstanding feature, it is said that more sea gulls followed the Paris than any other ship in hopes of grabbing scraps of the haute cuisine that were dumped overboard.[4] The French Line's success took off when a third ship joined the relay: the Ile de France.

File:Paris burning.jpg
The Paris burning at the docks in Le Havre.
File:SS Europa SS Paris sank.jpg
The Liberté after being deliberately sunk on an even keel, following her collision with the wreck of the Paris, lying on her side top of picture.

With the onset of the Great Depression, even these stylish French ships were sailing only a third full. The French Line avoided the possibility of "laying-up" by pressing the ship into cruise work. To some, it seemed scandalous to have such ships lazily roaming the Mediterranean or Scandinavia with a mere 300 passengers on board. On 18 April 1939 the Paris caught fire while docked in Le Havre and temporarily blocked the new superliner Normandie from exiting dry dock. She capsized and sank in her berth where she remained until after World War II, almost a decade later. A year after the war had ended, the 50,000-ton German liner Europa was handed over to the French Line as compensation for the Normandie and renamed Liberté. While the Liberté was being refitted in Le Havre, a December gale tore the ship from her moorings and threw her into the half-submerged wreck of the Paris. She settled quickly, but fortunately in an upright position. Six months later she was refloated and by spring 1947 she was in St. Nazaire for her final rebuilding.[5]

The Paris was yet another of the nearly dozen French ships to be destroyed by fire between the 1930s and 1940s.