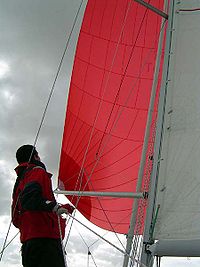 A spinnaker pole being used to set a conventional symmetric spinnaker

A spinnaker pole is a spar used in sailboats (both dinghys and yachts) to help support and control a variety of headsails, particularly the spinnaker. However, it is also used with other sails, such as genoas and jibs, when sailing downwind with no spinnaker hoisted. (Since the load on a spinnaker pole is very light on this point of sailing, sometimes a special light spinnaker pole called a whisker pole is used in these circumstances.)

The spinnaker pole is rigged to run from the base of the mast, where there is a special fitting for attaching one end of the pole, out to windward over the side of the boat. There, one of the control lines of whichever sail it is to be used with is run through a fitting on the other end of the spinnaker pole. This allows for more precise control of the corner of the sail to which the line is attached.