From SpottingWorld, the Hub for the SpottingWorld network...
Jump to:navigation, search
For other ships of the same name, see USS Stalwart.

USNS Stalwart (T-AGOS-1) was a Modified Tactical Auxiliary General Ocean Surveillance Ship and the lead ship of the her class.

Stalwart was laid down on 3 November 1982 by the Tacoma Boat Building Company. She was launched on 11 July 1983, and entered service with the United States Military Sealift Command on 12 April 1984. The ship served as an anti-submarine surveillance ship during the Cold War, then as an anti-drug smuggling vessel as part of the United States' War on Drugs.

Stalwart left military service on 15 November 2002, and was struck from the Naval Vessel Register on 2 December 2002. She was donated to the State University of New York Maritime College (SUNY-Maritime), and was renamed SUNY Maritime. As of 2008[update], the ship sits alongside the college's pier, but as funding promised by the government to repair and refit SUNY Maritime as a training vessel has not been provided, the ship has fallen into a state of disrepair.

Stalwart was laid down on 3 November 1982 by the Tacoma Boat Building Company, in Tacoma, Washington. She was launched on 11 July 1983, and entered service with the United States Military Sealift Command on 12 April 1984.[citation needed]

Stalwart and her sister ships were designed to collect underwater acoustical data in support of Cold War anti-submarine warfare operations in the 1980s. The main equipment used for this role was the Surveillance Towed Array Sensor System (SURTASS), a collection of acoustic sensors that process and transmit data by satellite to shore bases for in-depth analysis. SURTASS is a neutrally buoyant, 8,575-foot (2,614 m) array deployed on a 6,000 feet (1,800 m) tow cable, capable of operating between 500 and 1,500 feet (150 and 460 m) in depth.[citation needed]

Stalwart spent the first part of her career on patrol for Soviet Navy submarines.

In 1993, Stalwart and two sister ships, USNS Indomitable and USNS Capable, were converted to serve in the War on Drugs under Joint Interagency Task Force - East. The SURTASS sensors were replaced by an AN/SPS-49 long range air search radar and Link 11 system, to aid in location of drug smugglers.[citation needed]

Stalwart left military service on 15 November 2002, and was struck from the Naval Vessel Register on 2 December 2002.[1]

After she was struck, Stalwart was placed under the control of the U.S. Maritime Administration, which donated it to SUNY-Maritime. The college was promised US$300,000 in federal funding to repair and upgrade the ship, which was renamed SUNY Maritime after the college, but as of 2008, this funding has not been provided.[citation needed] 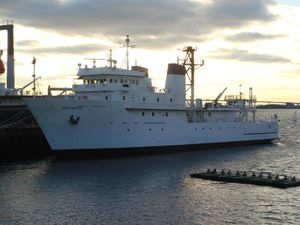 SUNY Maritime, tied up at the SUNY-Maritime College pier in March 2008.

As of March 2008, SUNY Maritime remains docked alongside at the college's pier. The lack of funding caused the ship to fall into a state of disrepair and deterioration: two of the four Caterpillar engines are believed to be beyond repair, while most of the ship's systems require significant mainteance to be made operational again.[citation needed] Because of the believed effort required to restore the vessel to operational condition, there have been calls[by whom?] to instead scrap SUNY Maritime. 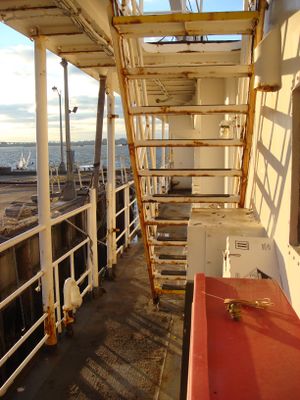 Aboard SUNY Maritime, looking aft from the midship exit.

Despite the condition of the ship, SUNY Maritime has been used as a classroom for Designated Duty Engineer courses, but the poor condition of the ship has impacted on the education of students. More often engineers from the neighboring Training Ship Empire State VI send engineering students to scavenge parts and components from the Stalwart. [citation needed]