General G. W. Goethals was built in 1911[3] or 1912[4] as the German commercial passenger-cargo ship SS Grunewald at Vegesack, Germany, by Bremer Vulkan. Before the United States entered World War I, she became an American ship owned by the Panama Railroad Steamship Company of New York City. The U.S. Navy acquired her on 10 March 1919, assigned her the naval registry Identification Number (Id. No.) 1443, and commissioned her the same day at Hoboken, New Jersey, as USS General G. W. Goethals with Lieutenant Commander Edward O. Roberts, USNRF, in command. 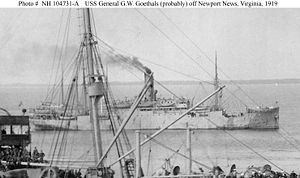 Assigned to the Cruiser and Transport Force and operated by the Navy under a United States Army account, General G. W. Goethals spent the bulk of her commissioned Navy service ferrying supplies for American forces in Europe to France and bringing home troops of the American Expeditionary Force who had served in Europe during World War I. Leaving New York City on 2 April 1919 for her first transatlantic voyage, she carried supplies to Bordeaux, France, returning to the United States on 4 May 1919. Subsequently she made two more voyages to Europe with supplies, and brought home nearly 3,000 troops.

On the day of her arrival in New York, General G. W. Goethals was decommissioned and turned over to the United States Department of War for return to the Panama Railroad Steamship Company.