SS Munsomo was built as a commercial collier by the Maryland Steel Company at Sparrows Point, Maryland, in 1916, for the Munson Steamship Company. The U.S. Navy inspected her in the 3rd Naval District in 1917 for possible World War I service, and acquired her from Munson on 28 June 1918 for use as a cargo ship. Assigned the naval registry Identification Number (Id. No.) 1607, she was commissioned as USS Munsomo at Baltimore, Maryland, the same day with Lieutenant Commander A. Asborn, USNRF, in command. 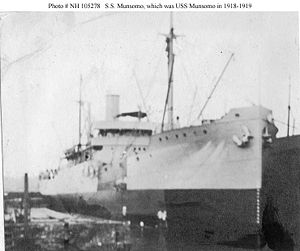 SS Munsomo probably around the time of her 1917 inspection in the 3rd Naval District for possible U.S. Navy service.

Assigned to the Naval Overseas Transportation Service, Munsomo took on a cargo of United States Army supplies and departed New York City on 9 August 1918 to cross the Atlantic in a convoy, bound for France. She reached Nantes, France, on 29 August 1918. After discharging her cargo she moved on to Le Verdon-sur-Mer, France, then returned to the United States, arriving at Baltimore on 25 September 1918.

On 16 October 1918, Munsomo departed with a mixed cargo for a second transatlantic crossing in convoy, reaching Brest, France, on 2 November 1918. She proceeded to Nantes to ballast, then returned to the United States, arriving at Newport News, Virginia, on 29 November 1918.

Munsomo next made a run to Antilla, Cuba, carrying general supplies and returned to the United States with a cargo of sugar, arriving at New York City.

Munsomo was decommissioned on 4 February 1919 and transferred to the United States Shipping Board the same day for simultaneous return to Munson Steamship Lines.

She returned to mercantile service as SS Munsomo. In 1938, she was sold to Italian interests and renamed SS Capo Orso. Capo Orso was sunk during World War II by a torpedo dropped by a torpedo plane.