From SpottingWorld, the Hub for the SpottingWorld network...
Jump to:navigation, search
For other ships of the same name, see USS Nautilus and Ships named Nautilus.

USS Nautilus (SSN-571) was the world's first operational nuclear-powered submarine. She was also the first vessel to complete a submerged transit across the North Pole.

Named for the submarine in Jules Verne's Twenty Thousand Leagues Under the Sea, Nautilus was authorized in 1951 and launched in 1954. Because her nuclear propulsion allowed her to remain submerged for far longer than diesel-electric submarines, she broke many records in her first years of operation and was able to travel to locations previously beyond the limits of submarines. In operation, she revealed a number of limitations in her design and construction; this information was used to improve subsequent submarines.

The Nautilus was decommissioned in 1980 and designated a National Historic Landmark in 1982. She has been preserved as a museum of submarine history in New London, Connecticut, where she receives some 250,000 visitors a year.

In July 1951 the US Congress authorized the construction of a nuclear-powered submarine for the U.S. Navy, which was planned and personally supervised by Admiral Hyman G. Rickover, known as the "Father of the Nuclear Navy."[3] On 12 December 1951 the U.S. Department of the Navy announced that the submarine would be called Nautilus—the fourth U.S. Navy vessel officially so named[4]—and would carry the hull number SSN-571.

Nautilus's keel was laid at General Dynamics' Electric Boat Division in Groton, Connecticut by Harry S. Truman, President of the United States, on 14 June 1952, and the ship was designed by John Burnham. She was christened on 21 January 1954 and launched into the Thames River, sponsored by Mamie Eisenhower, the wife of Truman's successor Dwight D. Eisenhower. Nautilus was commissioned on 30 September 1954, under the command of Commander Eugene P. Wilkinson, USN.

Nautilus was powered by the S2W naval reactor, a pressurized water reactor produced for the U.S. Navy by Westinghouse Electric Corporation.

Following her commissioning, Nautilus remained dockside for further construction and testing. At 11:00 hours on 17 January 1955 she put to sea for the first time and signalled her historic message: "Underway on nuclear power." On 10 May, she headed south for shakedown. Submerged throughout, she traveled 2,100 km (1,100 nautical miles) from New London to San Juan, Puerto Rico and covered 2,223 km (1,200 nmi) in less than ninety hours. At the time this was the longest submerged cruise by a submarine and at the highest sustained speed (for at least one hour) ever recorded.

From 1955 to 1957, Nautilus continued to be used to investigate the effects of increased submerged speeds and endurance. The improvements rendered the progress made in anti-submarine warfare during the Second World War virtually obsolete. Radar and anti-submarine aircraft, which had proved crucial in defeating submarines during the War, proved ineffective against a vessel able to move out of an area in record time, change depth quickly and stay submerged for very long periods.

File:GWBridgeUSSNautilus.agr.jpg
Nautilus passes under the George Washington Bridge during a visit to New York Harbor in 1956.

On 4 February 1957, Nautilus logged her 60,000th nautical mile (111,120 km), matching the endurance of her namesake, the fictional Nautilus described in Jules Verne's novel Twenty Thousand Leagues Under The Sea. In May, she departed for the Pacific Coast to participate in coastal exercises and the fleet exercise, operation "Home Run," which acquainted units of the Pacific Fleet with the capabilities of nuclear submarines.

Nautilus returned to New London, Connecticut, on 21 July and departed again on 19 August for her first voyage of 2,226 km (1,202 nmi) under polar pack ice. Thereafter, she headed for the Eastern Atlantic to participate in NATO exercises and conduct a tour of various British and French ports where she was inspected by defense personnel of those countries. She arrived back at New London on 28 October, underwent upkeep, and then conducted coastal operations until the spring.

Operation Sunshine - Under the North Pole 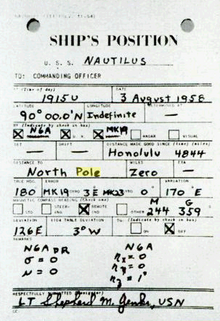 On 25 April 1958, she was underway again for the West Coast, now commanded by Commander William R. Anderson, USN. Stopping at San Diego, San Francisco, and Seattle, she began her history-making polar transit, operation "Sunshine," as she departed the latter port 9 June. On 19 June she entered the Chukchi Sea, but was turned back by deep draft ice in those shallow waters. On 28 June she arrived at Pearl Harbor to await better ice conditions. By 23 July her wait was over and she set a course northward. She submerged in the Barrow Sea Valley on 1 August and on 3 August, at 2315 (EDST) she became the first watercraft to reach the geographic North Pole[5]. From the North Pole, she continued on and after 96 hours and 2,945 km (1,590 nmi) under the ice, she surfaced northeast of Greenland, having completed the first successful submerged voyage around the North Pole. The technical details of this mission were planned by scientists from the Naval Electronics Laboratory including Dr. Waldo Lyon who accompanied Nautilus as chief scientist and ice pilot.

Navigation beneath the arctic ice sheet was difficult. Above 85 degrees both magnetic compasses and normal gyrocompasses become inaccurate. A special gyrocompass built by Sperry Rand was installed shortly before the journey. There was a risk that the submarine would become disoriented beneath the ice and that the crew would have to play "longitude roulette". Commander Anderson had considered using torpedoes to blow a hole in the ice if the submarine needed to surface.

The trip beneath the ice cap was an important boost to America as the Soviets had recently launched Sputnik but had no nuclear submarine of their own. During the address announcing the journey the president mentioned that one day nuclear cargo submarines might use that route for trade.[6]

Proceeding from Greenland to the Isle of Portland, England, she received the Presidential Unit Citation, the first ever issued in peace time, from American Ambassador J H Whitney, and then set a westerly course which put her into the Thames River estuary at New London 29 October. For the remainder of the year she operated from her home-port, New London, Connecticut.

(See USS Skate (SSN-578) for the first surfacing of a submarine at the North Pole.)

Following fleet exercises in early 1959, Nautilus entered the Portsmouth Naval Shipyard in Kittery, Maine, for her first complete overhaul (28 May 1959-15 August 1960). Overhaul was followed by refresher training and on 24 October she departed New London for her first deployment with the Sixth Fleet in the Mediterranean Sea, returning to her home-port 16 December.

Nautilus operated in the Atlantic, conducting evaluation tests for ASW improvements, participating in NATO exercises and, during October 1962, in the naval quarantine of Cuba, until she headed east again for a two month Mediterranean tour in August 1963. On her return she joined in fleet exercises until entering the Portsmouth Naval Shipyard for her second overhaul 17 January 1964.

On 2 May 1966, Nautilus returned to her home-port to resume operations with the Atlantic Fleet, and at some point around that month, logged her 300,000th mile (555,600 km) underway. For the next year and a quarter she conducted special operations for ComSubLant and then in August 1967, returned to Portsmouth, for another year's stay, following which she conducted exercises off the southeastern seaboard. She returned to New London in December 1968.

In the spring[when?] of 1979, Nautilus set out from Groton, Connecticut on her final voyage under the command of Richard A. Riddell. She reached Mare Island Naval Shipyard of Vallejo, California on 26 May 1979 — her last day underway. She was decommissioned and stricken from the Naval Vessel Register on 3 March 1980.

The hull and superstructure of Nautilus vibrated sufficiently that sonar became ineffective at more than 4 knots (7.4 km/h) speed.[7] Also, noise generation is undesirable in stealth operations and facilitates detection of the vessel. Lessons learned from this problem were applied in later nuclear submarines.

For outstanding achievement in completing the first voyage in history across the top of the world, by cruising under the Arctic ice cap from the Bering Strait to the Greenland Sea.

During the period 22 July 1958 to 5 August 1958, U.S.S. NAUTILUS, the world's first atomic powered ship, added to her list of historic achievements by crossing the Arctic Ocean from the Bering Sea to the Greenland Sea, passing submerged beneath the geographic North Pole. This voyage opens the possibility of a new commercial seaway, a Northwest Passage, between the major oceans of the world. Nuclear powered cargo submarines may, in the future, use this route to the advantage of world trade.

The skill, professional competency and courage of the officers and crew of NAUTILUS were in keeping with the highest traditions of the Armed Forces of the United States and the pioneering spirit which has always characterized our country.[8]

To commemorate the first submerged voyage under the North Pole, all members of the Nautilus crew who made the voyage are authorized to wear their Presidential Unit Citation ribbon with a special clasp in the form of a gold block letter N. (see image above).[9]

Nautilus was designated a National Historic Landmark by the United States Secretary of the Interior on 20 May 1982.[11][12][13]

She was named as the official state ship of Connecticut in 1983.[14] Following an extensive conversion at Mare Island Naval Shipyard, Nautilus was towed back to Groton, Connecticut arriving on 6 July 1985. On April 11, 1986, Nautilus opened to the public as part of the U.S. Navy Submarine Force Library and Museum.[5]

Nautilus now serves as a museum of submarine history, after undergoing a five-month preservation in 2002, at the Electric Boat division of General Dynamics, at a cost of approximately $4.7 million. The historic ship Nautilus attracts some 250,000 visitors annually to her present berth near the Naval Submarine Base New London.

Nautilus celebrated the 50th anniversary of her commissioning on 30 September 2004 with a ceremony that included a speech from Vice Admiral Eugene P Wilkinson, the first Commanding Officer of Nautilus, and a designation of the ship as an American Nuclear Society National Nuclear Landmark.

Visitors may tour the forward two compartments, with guidance from an automated system. Tours aft of the control room are not permitted due to security concerns.

The Nautilus is the subject of an episode of the syndicated television anthology series, The Silent Service, which aired during the 1957-1958 season.