A Halcyon 23 is a type of sailing ship which was built in England. 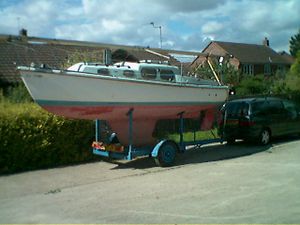 Smoot Yan, a Halcyon 23 ready for the road

The Halcyon 23 was designed by Alan Buchanan in the 1960's. At first, it became known under the name "Crystal". After several changes in the accommodation plan, the vessel was taken into production by Offshore Yachts Ltd. in 1965. It became a popular model which remained in production until 1975. In that year, Offshore Yachts Ltd. was forced to close down its operation, after there had been a fire in the shipyard.

The ship's hull is constructed out of fibreglass. One could choose between a model with a cast iron bulb or twin keel. The dimensions of the Halcyon 23 are as follows: