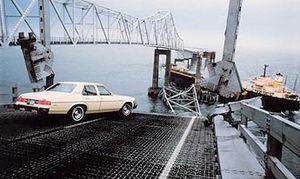 The collapsed original bridge on May 9, 1980 after the Summit Venture collision. Photo by St. Petersburg Times.

Summit Venture was involved in a fatal collision with a bridge in Tampa Bay, Florida on May 9, 1980. While negotiating a required turn in the narrow channel during a storm, the radar failed, and the freighter struck one of the piers on the southbound span of the original Sunshine Skyway Bridge. 1,400 feet of the steel cantilever highway bridge collapsed, causing a Greyhound Lines bus, among other vehicles, to plunge 165 feet into the bay. A total of 35 people died.

The pilot of the Summit Venture on that day was John E. Lerro. He was cleared of wrongdoing by both a state grand jury and a Coast Guard investigation. Although Lerro resumed his shipping duties soon afterward, he was forced to retire months later by the onset of multiple sclerosis,[1] dying from complications caused by the disease on August 31, 2002 at the age of 59.

Wesley MacIntire was the only person to survive the fall. His vehicle hit the Summit Venture's deck before falling into Tampa Bay, allowing him to escape. He sued the company that owned the ship, and settled for $175,000 in 1984.[2] He died in 1989, always regretting the fact that he was the sole survivor among those that fell.[3]

A new bridge was completed in 1987 to replace the old. Several safeguards were included in the design to prevent a repeat occurrence of the Summit Venture incident, such as the installation of massive concrete bumpers or "dolphins" around the main span's piers to mitigate collisions.

The Summit Venture, after having her hull repaired, continued service under Liberian flag for another 13 years. Her last return to Tampa Bay was in 1990 for a Coast Guard inspection. The ship was sold to Greek interests in 1993, and rechristened Sailor 1, predominantly plying the waters off the west coast of the U.S. In 2004, the ship again traded hands and was sold to a Singapore firm. It was renamed the KS Harmony, and provides service currently in the Caribbean.