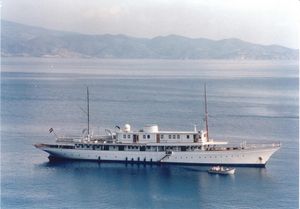 Madiz is the historic yacht that end 2006 broke a record in the shipping industry by being the only ship in the world to be in class "+100A1" with Lloyd's Register of Shipping, 100 years after the date of its building. It is an elegant 57 meter twin screw steel yacht built on the River Clyde in Scotland, in 1902.

She is the only vessel in the world over 100 years old to still maintain its class with Lloyd’s Register of Shipping. This milestone becomes more significant when related to the number “100” contained in the Lloyd’s Register class symbols. The number “100” was added to their classification symbols to distinguish the iron and later steel hull ships from wooden ones, based on the assumption, at the time, that the former would have a life span of 100 years and over. The first “Rules for Iron Ships” were published in the 1855 Register. These were revised and the classification symbol updated in 1870. The iron barque “Lizzie Leslie” was the first iron vessel to be assigned the new notation +100A1.

After over 137 years, MADIZ is the only ship to actually prove that this assumption, that iron ships would live 100 years, was correct.

MADIZ underwent a major refit during 2003-2006, out of which 17 months in Drydock, and was re-classed under Lloyd’s Register of Shipping in her original Class of +100A1, making her the only ship to ever do so.

Madiz was designed by G. L. Watson, the pioneering yacht designer, who created the first design office exclusively for yachts and who designed some of the most successful America’s Cup yachts. It is the last surviving ship to have been designed by him personally.

She was built at the Ailsa Shipyard in Troon, Scotland, on the River Clyde, where one of the first and most famous ship building industries in the world, developed. In the 1900s 25% of all ships built worldwide were built there and the term "Clyde-Built" became a guarantee of quality and craftsmanship.

In the 2nd World War, she served in the Royal Navy as a Royal Patrol Yacht. King George VI, Queen Elisabeth and the present Queen Elizabeth used her on several occasions.

During this period MADIZ also participated in the development of the Radar, by carrying out the trials for the calibration and development of HF/DF (High Frequency Direction Finder, a prelude to the radar). It is interesting to note that, as available records show, MADIZ and the Norwegian Royal Yacht Norge, are probably the only ships still active that were involved in the Battle of the Atlantic.

Madiz is privately owned and has not been used for commercial purposes except once, at the request of Granada Television for the filming on her of Agatha Christie’s Poiroit episode “Problem at Sea”.

Madiz is an elegant, classic yacht and retains most of her original deck equipment and unique paneling: the original Burma teak on much of the deck and all the deck’s side panelings, Cuba mahogany in the original master bedrooms and solid oak paneling in the reception areas.

Originally she was powered by 2 steam engines. These were changed to Diesel engines (MTU Mercedes Maybach) in 1975.