RMS Empress of France was an ocean liner built in 1913-1914[1] by William Beardmore and Company at Glasgow in Scotland for Allan Line.[2]

In total, the ship's service history encompasses 99 trans-Atlantic voyages, 5 trans-Pacific voyages, and 8 other cruises in addition to her war service.[2]

This ship was the first North Atlantic liner with a cruiser stern. The vessel was built by William Beardmore & Co Ltd. at Glasgow. She was an 18,481 gross ton ship, length 571.4 ft x beam 72.4 ft, two funnels, two masts, four propellers and a speed of 18 knots. Her initial configuration provided accommodation for 287-1st, 504-2nd and 848-3rd class passengers.[2]

The ocean liner was initially launched as the SS Alsatian on 22 March 1912. She sailed from Liverpool on her maiden voyage to Saint John, New Brunswick for the Allan Line on 17 January 1914. On 22 May 1914, set out on her first trans-Atlantic crossing from Liverpool to Quebec. 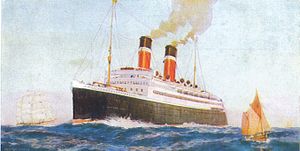 A postcard version of a painting of the SS Alsatian which was commissioned by Allan Line for this publicity and advertising purpose. The artist was Odin Rosenvinge.

Her last voyage that summer began on 17 July 1914; and when she returned to Europe, the nascent war in Europe brought a close to this truncated peacetime period of the ship's history.[2]

During the First World War, the SS Alsatian was converted into an Armed Merchant Cruiser; and she joined the 10th Cruiser Squadron patrolling off the Shetland Islands. HMS Alsatian became flagship for Commander Dudley de Chair.[3] Later, HMS Alsatian served as flagship for Vice Admiral Tucker. During the war years, she became one of the first ships to be fitted with the new wireless direction-finding apparatus. After the squadron was retired in 1917, she was re-fitted for peacetime service.[2]

At war's end, the ship was added to the fleet of Canadian Pacific Ocean Services Ltd. (CP), which absorbed the entire Allan Line fleet. On 28 September 1918, the SS Alsatian began her first voyage from Liverpool to Canada as a newly flagged ship of the Canadian Pacific fleet. After a second, trans-Atlantic voyage, the Alsatian was taken out of service for refitting at Glasgow.[2]

The ship was re-named Empress of France on 4 April 1919. This new Empress would have been distinguished by the Royal Mail Ship (RMS) prefix in front of her name because the British government and Canadian Pacific Railway (CPR) had decades earlier reached agreement on a contract for subsidized mail service between Britain and Hong Kong via Canada.

The Empress was one of four ocean liners to circumnavigate the world in 1923.[4]

On October 31, 1928, she sailed from Southampton for Suez, Hong Kong and Vancouver. Subsequently sailed on the Pacific until 17 October 1929 when she left Hong Kong en route to Liverpool.[2]

On 2 September 1931, the Empress of France set out for what was to be her final voyage from Southampton to Cherbourg and Quebec; and in then she was laid up in the Clyde.[2]