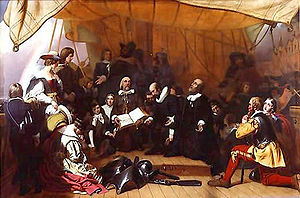 The Pilgrims on the Speedwell

The Speedwell was a 60-ton ship, the smaller of the two ships (along with Mayflower) intended to carry the Pilgrim Fathers to North America. A vessel of the same name and size traveled to the New World seventeen years prior as the flagship of the first expedition of Martin Pring.

The Speedwell was built in 1577, under the name Swiftsure, as part of English preparations for war against Spain. She participated in the fight against the Spanish Armada, and during the Earl of Essex' 1596 Azores expedition she served as the ship of his second in command, Sir Gilly Merick. After hostilities with Spain ended, she was decommissioned in 1605, rebuilt, and renamed the Speedwell.

The Leiden Separatists bought the ship Speedwell in Holland, and are said to have boarded it at Delfshaven. They then sailed to Southampton, England to meet the sister ship, Mayflower, which had been chartered by the merchant investors. In Southampton they joined with other Separatists and the additional colonists hired by the investors.

It would later be revealed that there was in fact nothing wrong with the ship. The crew had sabotaged it in order to escape the year long commitment of their contract.

Eleven people from the Speedwell boarded the Mayflower, leaving 20 people to return to London (including Robert Cushman) while a combined company of 103 continued the voyage. For a third time, the Mayflower headed for the New World. She left Plymouth on September 6, 1620 and entered Cape Cod Harbor on November 11, 1620. Speedwell's replacement, The Fortune, eventually followed, arriving at Plymouth Colony one year later on November 9, 1621. Philippe DeLannoy who was on the Speedwell with his uncle Francis Cooke, made the trip on that voyage.

In 1656 the Speedwell made a voyage from England to Boston, carrying a party of Quakers including Christopher Holder and John Copeland. Arriving in Massachusetts Bay Colony under the Governorship of John Endecott, they were deported for religious reasons and obliged to return to Britain. In the following year another party, including six of the Speedwell company, returned via Rhode Island aboard the Woodhouse: one of them became one of the Boston martyrs, judicially executed by Endecott.

At least two subsequent ships of the Royal Navy bore the same name, a ship of the line during the Napoleonic Wars and a modern nuclear submarine.