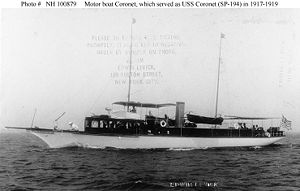 Coronet as a private motorboat sometime between 1905 and 1917.

Coronet was assigned to the 3rd Naval District, where she performed patrol duty for the remainder of World War I.

On 5 August 1919, Coronet was stricken from the Navy List and sold.