From SpottingWorld, the Hub for the SpottingWorld network...
Jump to:navigation, search
For other ships of the same name, see USS Mindanao.

USS Mindanao (ARG-3) was a Luzon-class internal combustion engine repair ship that saw service in the United States Navy during World War II. Named for the Island of Mindanao, second largest and southernmost island in the Philippines, it was the second U.S. Naval vessel to bear the name.

Originally built as the Liberty ship SS Elbert Hubbard (MCE-983) under Maritime Commission contract by Bethlehem Fairfield Shipyard, Inc. of Baltimore, Maryland; launched 13 May 1943; sponsored by Mrs. C. R. Spalding; acquired by the Navy on 20 May 1943; and commissioned as USS Mindanao (ARG-3) on 6 November 1943 with Commander G. B. Evans in command. After shakedown in Chesapeake Bay, Mindanao joined Task Group 29.7 (TG 29.7) on 20 December 1943, and sailed for Cuba, the Panama Canal, and Nouméa in New Caledonia, arriving 27 January 1944 to report for duty with Service Squadron South Pacific. The internal combustion engine repair ship immediately found herself with more than enough work. On 25 February she sailed to continue her vital task at Espiritu Santo, and in September she arrived at Manus to serve the forces staging for the Philippine campaign.

Now with TG 30.9, she was anchored in Seeadler Harbor on the morning of 10 November, when at about 08:50 the ammunition ship USS Mount Hood (AE-11) blew up. Mindanao, 350 yards (320 m) away, suffered extensive damage particularly to her superstructure, and aft. Of her crew, 180 were killed or wounded. The survivors, with Seabees from shore, immediately began to aid the wounded and clear the debris, a job which took seven days. Repairs began on the 18th, performed by her own crew with aid again from Seabees, as well as men and equipment from USS Medusa. By 21 December, Mindanao was ready to resume her key function in repairing engines for other ships. After a brief voyage to the Solomon Islands in February and March 1945, Mindanao arrived at Ulithi 27 March to prepare ships for the Okinawa campaign. There she served until 9 October, when she sailed for periods of duty at Okinawa and Shanghai.

Her duty supporting the occupation forces complete, Mindanao got underway for home 26 March 1946. She called at San Pedro, California; Balboa and Colón in the Panama Canal Zone; New Orleans, Louisiana; and Galveston, Texas, before arriving Orange, Texas on 12 July. She decommissioned there 17 May 1947 to join the Reserve Fleet, and remained at Orange even after being struck from the Naval Vessel Register and transferred to the Maritime Commission in 1961. In September, 1962 she joined the National Defense Reserve Fleet at Beaumont, Texas where she remained into 1969. 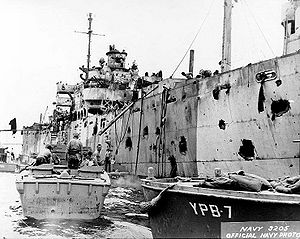 Salvage and rescue work underway on USS Mindanao (ARG-3) shortly after the USS Mount Hood (AE-11) blew up about 350 yards (320 m) away. Note the heavy damage to Mindanao's hull and superstructure, including large holes from fragment impacts. View looks forward from alongside her port quarter. Mindanao had 180 crewmen killed and injured by this explosion. She was under repair until 21 December 1944. Small craft alongside or nearby include (from left) YPB-6 (probable identification), two LCVPs and YPB-7.