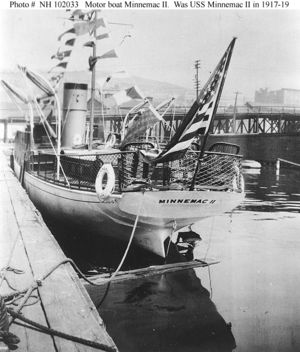 Minnemac II as a civilian motorboat sometime between 1914 and 1917, prior to her U.S. Navy service.

Minnemac II was built as a civilian motorboat of the same name in 1914 by George Lawley and Sons at Neponset, Massachusetts. The U.S. Navy acquired her under a free lease from her owner, Arthur J. Eddy of Chicago, Illinois on 7 May 1917 for World War I service as a patrol vessel. She was enrolled in the Naval Defense Reserve Force on 3 July 1917 and commissioned as USS Minnemac II (SP-202) on 5 July 1917 with Ensign Jerome Eddy, USNRF, in command.

Assigned to the Great Lakes, Minnemac II patrolled the waters of Lake Michigan out of her assigned section patrol base.

Following the end of World War I, Minnemac II was returned to her owner on 13 January 1919.