From SpottingWorld, the Hub for the SpottingWorld network...
Jump to:navigation, search
For other ships of the same name, see USS Seawolf.

USS Seawolf (SSN-575), a unique submarine, was the third ship of the United States Navy to be named for the seawolf, the second nuclear submarine, and the only U.S. submarine built with a liquid metal cooled (sodium) nuclear reactor.

Seawolf was technologically more advanced than her predecessor, USS Nautilus (SSN-571). Carrying a superheated steam powerplant, rather than a traditional saturated steam plant, reduced the size of the machinery spaces nearly 40%. Her liquid-sodium cooled reactor was more efficient than a water-cooled one, and quieter, but posed several safety hazards for the ship and crew. The phrase "Blue Haze" was often associated with the boat, even though there was only one sodium coolant leak ever noted, and that was while she was fitting out in the yards.

Although fully armed, Seawolf, like the first nuclear submarine, Nautilus, was primarily an experimental vessel. Seawolf was originally thought of publicly as a 'hunter-killer' sub, but in fact was intended to be a one off test platform for the LMSR reactor and future sonar platforms. Her future uses, however, would include covert operations in foreign waters, the likes of which were never envisioned by Admiral Rickover.

Seawolf's keel was laid down 7 September 1953 by the Electric Boat division of General Dynamics Corporation in Groton, Connecticut. She was launched on 21 July 1955 sponsored by Mrs. W. Sterling Cole, and commissioned on 30 March 1957 with Commander R. B. Laning in command.

Like all of the original nuclear subs, the project manager at Electric Boat was the General Manager of the company, in this case, the ubiquitous Bill Jones. During the parallel construction of the first nuclear submarines, the Navy, the Atomic Energy Commission, its independent labs, and the shipyard all worked together to learn together.

For the yard, the Power Plant Project manager was a separate function on these original nukes. Dennis B. Boykin III would lead EB's power plant installation, and return to the project two years later for the conversion. His counterpart at the Office of Naval Reactors, Gardner Brown, did the same.

Lieutenant James Earl "Jimmy" Carter, the only U.S. President to qualify in submarines, was to be her Engineering Officer, but had resigned his commission upon the death of his father in 1953. 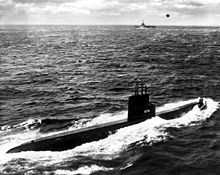 Seawolf departed New London, Connecticut, on 2 April for her shakedown cruise off Bermuda and returned on 8 May. Between 16 May and 5 August, she made two voyages to Key West and participated in intensive training exercises. On 3 September, she steamed across the North Atlantic to participate in NATO exercises. The submarine surfaced off Newport, Rhode Island, on 25 September after cruising 6,331 nonstop miles. The next day, President of the United States Dwight D. Eisenhower embarked and was taken for a short cruise onboard her.

Seawolf cruised to the Caribbean Sea for an exercise in November. In December, she began an availability period that lasted until 6 February 1958. She then participated in exercises along the east coast until early August.

Seawolf submerged on 7 August and did not surface again until 6 October. During this period, she logged over 13,700 nautical miles (25,400 km). She received the Navy Unit Commendation for demonstrating the ability of the nuclear-powered submarine to remain independent of the Earth's atmosphere for the period of a normal war patrol.

Seawolf returned to Electric Boat Company in Groton, Connecticut, on 12 December 1958, for conversion of her power plant from a S2G sodium-cooled LMFR to a S2Wa PWR. She was out of commission until 30 September 1960. The Office of Naval Reactors had determined that the one-off superheated steam powerplant was too difficult to maintain, since the superheaters were rarely operational. Constructed of rolled steel (vice forged steel), the superheaters were usually unable to produce in sufficient quantity to operate the plant at full capacity.

On 18 April 1959, the Navy disposed of the radioactive S2G plant by sealing it in a 30-foot high stainless steel containment vessel, towing it out to sea on a barge, and then sinking the barge at a point about 120 miles due east of Maryland in 9,100 feet of water. Twenty-one years later, the Navy was unable to relocate the container, but said that the radioactive materials inside should decay before the containment vessel deteriorated.[1][2][3]

Seawolf began a three-week period of independent operations on 25 October and returned to fleet operations in November and December. On 9 January 1961, Seawolf sailed to San Juan, Puerto Rico, to participate in local operations. On 25 January, she was ordered to locate and track the Portuguese passenger liner Santa Maria which had been seized by pirates two days earlier. The submarine made contact with the liner off the coast of Brazil on 1 February. After Santa Maria surrendered in Recife, the submarine returned to San Juan and continued east coast operations.

On 7 July, Seawolf began a two-month oceanographic voyage which took her to Portsmouth, England, before returning her to New London on 19 September 1961.

In 1963, Seawolf participated in the search for the lost USS Thresher (SSN-593) and in various local and fleet operations until April 1964. On 28 April, Seawolf stood out of New London en route to the Mediterranean Sea and a three and one-half month deployment with the Sixth Fleet. During the period, she operated with aircraft carrier Enterprise (CVAN-65), guided missile cruiser Long Beach (CGN-9), and guided missile frigate Bainbridge (DLGN-25) as a part of the world's first nuclear task force. More local East Coast exercises followed until 5 May 1965. On that date, the submarine entered the Portsmouth Naval Shipyard for refueling and an extensive overhaul bringing her up to the SUBSAFE standard put in place after the loss of Thresher. This overhaul lasted until September 1966.

Seawolf sailed from Portsmouth, New Hampshire, on 24 August 1967 for New London, Connecticut, which was again her home port. The following month, she sailed to the Caribbean Sea for refresher training and weapons trials. She had to have a propeller replaced at Charleston, South Carolina, in early October and then conducted sea trials in the Bahama Islands for the remainder of the month. The end of the year 1967 found her back at her home port.

Seawolf was operating from that port when she grounded off the coast of Maine on 30 January 1968. She was towed back to New London, Connecticut, for repairs and did not put to sea again until 20 March 1969, when she began sea trials. The submarine was in the Caribbean Sea during June and July conducting underwater sound and weapons systems tests. Seawolf was deployed with the Sixth Fleet from 29 September to 21 December 1969.

Seawolf operated along the East Coast until 9 November 1970 when her home port was changed to Vallejo, California, and she sailed for the West Coast. The submarine transited the Panama Canal on 17 November and changed operational control to Submarine Force, Pacific Fleet. She entered drydock at Mare Island Naval Shipyard on 8 January 1971 for overhaul and conversion to a special project platform and remained there until 21 June 1973, when she moved up the coast to Bangor, Washington. Seawolf returned to Mare Island on 4 September 1973.

The euphemistic 'special project platform' description is explained by carefully examining photos of the ships from before and after the yard period. The extended hull forward of the sail held intelligence gathering equipment that supported covert operations.

In 1974, Seawolf completed post-conversion testing and evaluation period and conducted her first Pacific Fleet deployment, operating independently for a period of three months. For her performance of duty, she was awarded a second Navy Unit Commendation. In 1975, Seawolf came under the exclusive direction of Submarine Development Group One, and for outstanding performance in 1974–1975, was awarded a Battle Efficiency "E."

In 1976, Seawolf received her second consecutive Battle Efficiency "E" and the Engineering "E" for Excellence. During her second Pacific Fleet deployment, she conducted independent submerged operations for three months and demonstrated superior endurance by remaining submerged for 89 consecutive days, a U.S. Navy record. She received her third Navy Unit Commendation.

In 1977, Seawolf received her third Battle Efficiency "E" and her second Engineering "E" for Excellence. During her third Pacific Fleet deployment, she conducted 79 consecutive days of independent submerged operations and received her fourth Navy Unit Commendation and the Navy Expeditionary Medal. In 1978, Seawolf conducted her fourth Pacific Fleet deployment.

Some of the above deployments are chronicled in the book Blind Man's Bluff by Sherry Sontag, Christopher Drew & Annette Lawrence Drew. Published in 1998, the book details previously classified stories of espionage and Cold War activities of American submarines, and specifically details one of Seawolf's missions into a Russian harbor.

In August 1981, Seawolf deployed on her fifth Pacific Fleet deployment. She returned to homeport in October 1981 and received the Navy Expeditionary Medal. In 1983, Seawolf conducted her sixth Pacific Fleet deployment of 76 days and returned to Mare Island Naval Shipyard in May 1983. She was awarded the Navy Expeditionary Medal, another Battle Efficiency "E," another Engineering "E," a Supply "E," and a Damage Control "DC." In 1984, Seawolf conducted a 93-day deployment to the Western Pacific, returned in July, and continued her high operating tempo with numerous local operations. She was awarded her third consecutive Supply "E," a Communications "C," and the Deck Seamanship Award.

In April 1986, Seawolf conducted her last Western Pacific deployment and returned to Mare Island in June 1986 to prepare for decommissioning. Decommissioned 30 March 1987, Seawolf was stricken from the Naval Vessel Register the following 10 July. The former submarine began the Navy's Ship-Submarine Recycling Program on 1 October 1996 and completed it on 30 September 1997.