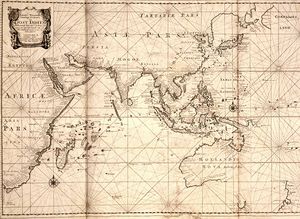 The VOC required ships to utilise the Brouwer Route to cross from the Cape to Batavia, enjoying the prevailing westerlies by travelling eastwards until turning north. Turning north too late from a miscalculation in the longitude risked being wrecked on the coast or reefs of Australia.[4] However, wishing to call into Western Australia, skipper Jan Steyns ignored The Company's directorate and protests from his steersman and headed ENE.[2]

In darkness at 7:30pm on 9 June 1727 the ship crashed heavily into Half Moon Reef on the western edge of Pelsart Group of the Houtman Abrolhos island group, which lie 60 km west of the Western Australian town of Geraldton.[2][3] The impact dislodged the rudder and snapped off the mainmast,[3] but the ship did not break up immediately.[2] The lookout spotted breakers half an hour before the impact but wrote them off as moonlight reflecting off the sea.[3]

Heavy sea conditions saw at least 10 men drown at the first attempt to launch a boat. After one week a long boat was launched. Later, most of the remaining crew was ferried on the long boat to what would be later known as Gun Island; a flat, rocky, 800 by 350 m limestone island located 4 km off the reef.[5] From Gun and surrounding islands, the critical commodity of fresh water was available, as well as vegetables, birds and seals that were combined with the ship's goods to sustain the survivors.[2]

While the Zeewijk did not break up immediately and goods, including the treasure chests, were transferred to Gun Island, it was obvious to the crew that the ship could never be floated from its position locked into the reef.[5] A rescue group of 11 of the fittest survivors and First Mate Pieter Langeweg set off for Batavia in the longboat on 10 July, but were never heard of again.[5] In December 1727 two boys were found guilty of having committed sodomy together. They were sentenced to death and were left alone on lonesome coral slates (each boy on a separate island).[6]

On 29 October 1727 the ship's log mentions the intentions of the crew to construct a vessel to carry them to Batavia; the Sloepie.[2] On 7 November, the keel of the Sloepie was laid down.[7] Utilising materials from the wrecked Zeewijk (including two swivel mounted cannon to protect the treasure from pirates[8]) and local mangrove timber she became a 20 m long by 6 m wide[2] sloop, resembling a North Sea fishing vessel.[8] Constructed in 4 months and launched on 28 February 1728, the Sloepie was the first ever European ship built in Australia.[8] On 26 March, 88 men set off on the one month journey to Batavia. Six died on the way, leaving 82 of the initial 208 to arrive in Batavia on 30 April 1728.[8]

Batavia's High Court of Justice prosecuted skipper Jan Steyns for losing the Zeewijk and falsifying the ship's records. He lost his position, salary and property to the Company.[9] 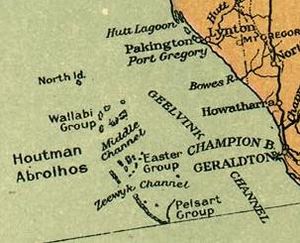 A 1916 map of the Houtman Abrolhos, showing the Zeewyk Channel between the Easter Group and the Pelsaert Group

In 1840 HMS Beagle found relics at the camp site, including a VOC cannon and two coins dated 1707 and 1720 which helped to confirm that the site belonged to the Zeewijk. They named the Zeewyk Channel after the wreck.

In the 1880s and 1890s a large amount of material was recovered during guano mining. Items including bottles, coins, wine glasses, jars, pots, spoons, knives, musket and cannon balls, tobacco and pipes[2] were found. Florance Broadhurst, a director of the Broadhurst and McNeil phosphate company, catalogued the finds and ended up donating most to the Perth Museum.[10]

After an elephant tusk found in March 1966 put him on the trail, the actual wreck site was discovered in March 1968 by journalist and diver Hugh Edwards. The Western Australian Museum conducted several expeditions to recover artefacts from the wreck and survey the site.[11]