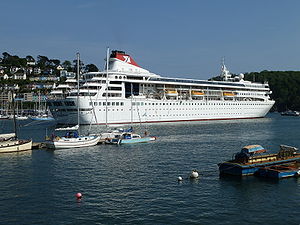 The vessel was constructed in 1993 for Crown Cruise Line, operating under the name Crown Dynasty. Between 1993 and 1997, the vessel was also charted by Cunard Line, who would name the ship Cunard Crown Dynasty while under their flag.

The vessel returned to her original fleet and name in 1999, but was sold to Fred. Olsen Cruise Lines in 2001, where the vessel currently operates under the name Braemar. Her sister ship, the former Crown Jewel operated until 2008 as the SuperStar Gemini for Star Cruises.[1]

21 May 2010: Dartmouth, Devon, UK. Braemar is so large that she had to enter Dartmouth harbour stern first, with one tug to assist. She left the same evening with the tug in attendance, but not assisting, nor with any lines attached. That says a lot about the ship and the Dartmouth Pilot.