Charles W. Morgan was a U.S. whaleship during the 19th and early 20th century. Ships of this type usually harvested the blubber of whales for whale oil, which was commonly used in lamps during the time period. The ship is currently an exhibit at the Mystic Seaport museum in Mystic, Connecticut.

The ship is named for its original owner, a Quaker whaling merchant who ordered its construction from the shipbuilders Jethro and Zachariah Hillman of New Bedford, Massachusetts. The ship's maiden voyage began on September 6, 1841, with a journey around Cape Horn and cruised across the Pacific Ocean. Following the Morgan's initial three year and four month voyage, she came home with 1,600 barrels of sperm oil, 800 barrels of whale oil and 10,000 lbs of whalebone, known as baleen, which was worth around USD$56,000.

The hull and deck of Morgan reflected the three typical functions of a whale ship: 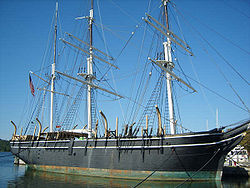 In her 80 years of service, she made 37 voyages ranging in length from nine months to five years. Charles W. Morgan, in total, brought home 54,483 barrels of sperm whale oil and 152,934 pounds of whalebone. She sailed in the Indian and South Atlantic Oceans, surviving ice and snow storms. Her crew survived a cannibal attack in the South Pacific. Between 1888 and 1904 she was based in San Francisco.

Morgan had more than 1,000 whalemen of all races and nationalities in her lifetime. Her crew included not only Americans, but sailors from Cape Verde, New Zealand, the Seychelles, Guadeloupe, and Norfolk Island. The ship's crew averaged around 33 men per voyage. As with other whaleships in the 1800s, Morgan often was home to the captain's family. The Morgan was owned and managed by the J. & W. R. Wing Company of New Bedford.[3]

On the night of June 30, 1924, the Charles W. Morgan caught fire when the flaming wreck of the steamer Sankaty, which had drifted across the Acushnet River from New Bedford harbor in flames, collided with it. Badly charred, Morgan narrowly escaped destruction.[4][5][6]

File:Charleswmorganwhalingboat.jpg
One of the Charles W. Morgan's whaleboats, featuring models of crew members with oars and harpoons.

The whaling days came to an end with the perfection of refining petroleum. Morgan was under the care of Whaling Enshrined, Inc. until 1941, when she was transferred to Mystic Seaport, where she still stands to this day. The ship is the only surviving wooden whaleship from the 1800s American fleet.[7] 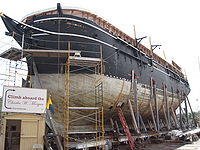 The Charles W. Morgan is currently in dry-dock undergoing restoration.

The Charles W. Morgan arrived at Mystic Seaport in December 1941, narrowly avoiding destruction during World War II. The ship was declared a National Historic Landmark and listed on the National Register of Historic Places in 1966.[2][7][8]

An initial restoration and preservation project was undertaken in 1968. A new restoration effort was started in 2009.

Mystic Seaport has recently completed a multi-million dollar shipyard upgrade to accommodate the next phase of Morgan's restoration, which is currently underway.