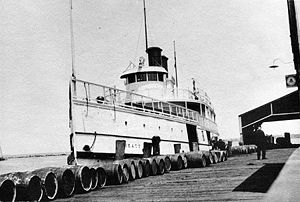 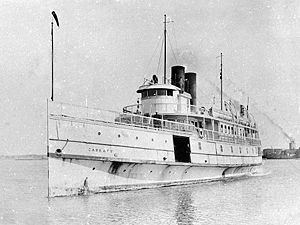 The Sankaty (a.k.a. HMCS Sankaty a.k.a. Charles A. Dunning) was a propeller-driven steamer that served as a ferry to Martha's Vineyard and Nantucket in Massachusetts; in Rockland, ME; Stamford, CT and Oyster Bay, Long Island; Staten Island; Wood Islands, Prince Edward Island and Caribou, Nova Scotia; and served as a minelayer for the Royal Canadian Navy during World War II.

From its construction in 1911 until 1924, the Sankaty operated as a ferry serving the islands of Martha's Vineyard and Nantucket. While not the first propeller-driven steamer to serve these islands (which was the Helen Augusta which substituted for the Monohansett during the Civil War) it marked the end of the paddlewheel steamer era for the Cape and Islands.[4]

The Sankaty rolled much more than the sidewheelers that preceded it. Because of this, the ladies' parlor and toilet was situated on the upper deck in a location to reduce the motion and vibration while on the rough waters of Vineyard Sound.[3]

On the night of June 30, 1924, Sankaty caught fire and burned down to its steel hull while tied up overnight in New Bedford harbor.[3] It drifted across the Acushnet River in flames and crashed into the famous whaling ship Charles W. Morgan, setting it on fire as well.[7][8]

Sankaty was raised, sold and rebuilt with an open deck for use as a car ferry in Rockland, ME.[3] A few years later it was sold again to serve as a ferry between Stamford, CT and Oyster Bay, Long Island.[9] [10] It also evidently served as a Staten Island Ferry.[11]

In 1941 the Sankaty was purchased by Northumberland Ferries of Prince Edward Island, Canada, but before it began service it was requisitioned by the Royal Canadian Navy to serve in World War II as a minelayer, HMCS Sankaty. After the war it was renamed the Charles A. Dunning, and served from 1946 until 1964 in the waters between Wood Islands, Prince Edward Island and Caribou, Nova Scotia. During this period its capacity was twenty-three cars and four trucks.[12] It was sold for scrap in 1964, but sank en route to Sydney, Nova Scotia.[13] 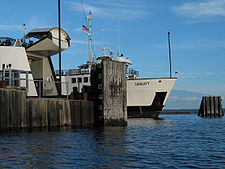 The M/V Sankaty at the wharf in Woods Hole.

In 1994, The Woods Hole, Martha's Vineyard and Nantucket Steamship Authority began service of a new freight vessel Sankaty, named after this old steamer.[14]