The Golden Hind (or Golden Hinde) (pronounced /ˈhaɪnd/) was an English galleon best known for its circumnavigation of the globe between 1577 and 1580, captained by Sir Francis Drake. She was originally known as the Pelican, but was renamed by Drake mid-voyage in 1577, as he prepared to enter the Strait of Magellan, calling it the Golden Hind to compliment his patron, Sir Christopher Hatton, whose armorial crest was a golden 'hind' (the heraldic term for a female deer). Hatton was one of the principal sponsors of Drake's world voyage.

In 1577 Elizabeth I of England chose Sir Francis Drake as the leader of an expedition intended to pass around South America through the Strait of Magellan and to explore the coast that lay beyond. The queen's support was advantageous; he had official approval to benefit himself and the queen as well as to cause the maximum damage to the Spaniards. This would eventually culminate in the Anglo–Spanish War. Before setting sail, Drake met the queen face-to-face for the first time and she said to him, "We would gladly be revenged on the King of Spain for divers injuries that we have received."[1] The explicit object was to "find out places meet to have traffic." Drake, however, acted as a privateer, with unofficial support from Queen Elizabeth.[2] He set sail in December with five small ships, manned by 164 men, and reached the Brazilian coast in the spring of 1578. His flagship, the Pelican, which Drake renamed the Golden Hind, displaced only about 100 tons.[3]

On 1 March 1579, the Golden Hind took the Spanish galleon Nuestra Señora de la Concepción, which had the largest treasure captured to that date: over 360,000 Pesos.[4] The six tons of treasure took six days to transship.[5] Subsequently Drake sailed North, probably to around San Francisco Bay, claiming this land as 'Nova Albion', leaving on 23 July.[6] He then came back across the Pacific, reaching the Cape of Good Hope on 18 June 1580 and Sierra Leone on 22 July.[7] On 26 September 1580, Francis Drake took his ship into Plymouth Harbour with only 56 of the original crew of 100 left aboard.[8] Despite his piratical conduct on his voyages, Queen Elizabeth herself went aboard the Golden Hind, which was lying at Deptford in the Thames estuary, and personally bestowed a knighthood on him;[9] her share of the treasure came to almost £160,000: "enough to pay off her entire foreign debt and still have £40,000 left over to invest in a new trading company for the Levant. Her return and that of other investors came to £47 for every £1 invested, or a total return of 4,700%."[7]

The table in the Middle Temple Hall (in the City of London) is reputed to have been made from the wood of the Golden Hind, as is a chair in the Great Hall, Buckland Abbey, Devon. 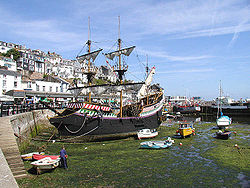 The second replica in Brixham, England during low tide

A modern full-size authentic replica of the ship, also called the Golden Hinde, was built by traditional handcraft in Appledore, North Devon and launched in 1973. It has travelled more than 140,000 miles (225,000 km), a distance equal to more than five times around the globe. Like the original, it has circumnavigated the world. It first sailed, in 1973, to San Francisco to commemorate Sir Francis Drake's claiming of California for Queen Elizabeth I. In 1979-1980, it retraced Drake's around the world route. In 1981-1984, it berthed in Britain and was established as an educational museum. In 1984-1985, it circumnavigated the British Isles and then sailed to the Caribbean. In 1986, it sailed through Panama Canal to Canada for the World's Fair in Vancouver. In 1987, it began a US tour, visiting ports in Washington, Oregon, and California. In 1988, it sailed back through the Panama Canal from California to Texas. In 1989, it visited ports on the Gulf of Mexico. In 1990-1991, it visited ports on the east coast of the US. In 1992, it returned to tour the UK. It has been featured in three films, Swashbuckler (1976), Shogun (1979) and Drake's Venture (1980). Since 1996 it has been berthed at St Mary Overie Dock on Cathedral Street, in Bankside, Southwark, London, between Southwark Cathedral and Clink Street (51°30′25″N 0°5′25″W﻿ / ﻿51.50694°N 0.09028°W﻿ / 51.50694; -0.09028). It hosts visits from schools in which children can dress up as Tudor sailors and receive living history lessons about Elizabethan naval history.

Other modern ships of the same name

For many years, a Great Lakes dry bulk carrier was named Golden Hind, in honour of the original ship. She was a steam turbine powered tanker built in Collingwood, Ontario, during 1951-1952. She sailed as the Imperial Woodbend under the Canadian flag for Imperial Oil. Transformed during the winter of 1954-1955 when Imperial's need for her ended, she was converted to a 601.50' dry bulk carrier at Port Weller, Ontario. She resumed sailing for the Mohawk Navigation Company. Carrying primarily iron ore and grain cargoes, she sailed the Great Lakes and the Saint Lawrence Seaway for many years until the downturn in the North American steel industry and changing patterns in the grain trade spelled her end. Laid up throughout much of the early half of the 1980s due to lack of cargoes, the veteran ore carrier was finally sold for scrap in 1986 after making a handful of trips for the Groupe Desgagnes fleet.

The onscreen symbol of Westward Television was a silver model of the Golden Hind.

On Firesign Theatre's album Everything You Know Is Wrong, a character named Bob Hind hosts a travel programme called "The Golden Hind."

In the episode Hidden Valley of The Cisco Kid, the Golden Hind was the name of the ship captained by George Challis.

The train operating company First Great Western operate 2 services a day named after the Golden Hind. One being a service in the morning from Penzance to London Paddington and the other being a return journey in the evening.

In the 1920 book The Airship "Golden Hind" by Percy F. Westerman, a dirigible that is attempting to circumnavigate the world is named the Golden Hind.