From SpottingWorld, the Hub for the SpottingWorld network...
Jump to:navigation, search
For other uses, see Galleon (disambiguation). 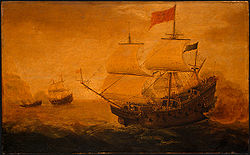 A galleon was a large, multi-decked sailing ship used primarily by European states from the 16th to 18th centuries. Whether used for war or commerce, they were generally armed with the demi-culverin type of cannon.

The galleon was an ocean going ship type which evolved from the carrack in the second half of the sixteenth century. A lowering of the forecastle and elongation of the hull gave galleons an unprecedented level of stability in the water, and reduced wind resistance at the front, leading to a faster, more maneuverable vessel. The galleon differed from the older types primarily by being longer, lower and narrower, with a square tuck stern instead of a round tuck, and by having a snout or head projecting forward from the bows below the level of the forecastle. In Portugal at least, carracks were usually very large ships for their time (often over 1000 tons), while galleons were mostly under 500 tons, although the Manila galleons were to reach up to 2000 tons. Carracks tended to be lightly armed and used for transporting cargo, while galleons were purpose-built warships, and were stronger, more heavily armed, and also cheaper to build (5 galleons could cost around the same as 3 carracks) and were therefore a much better investment for use as warships or transports. There are nationalist disputes about its origins and development, but each Atlantic sea power built types suited to their needs, while constantly learning from their rivals.

The galleon was powered entirely by sail, carried on three or four masts, with a lateen sail continuing to be used on the last (usually third and fourth) masts. They were used in both military and trade applications, most famously in the Spanish treasure fleet, and the Manila Galleons. In fact, galleons were so versatile that a single vessel may have been refitted for wartime and peacetime roles several times during its lifespan. The galleon was the prototype of all square rigged ships with three or more masts for over two and a half centuries, including the later full rigged ship.

The principal warships of the opposing English and Spanish fleets in the 1588 confrontation of the Spanish Armada were galleons, with the modified English "race built" galleons developed by John Hawkins proving decisive, while the capacious Spanish galleons, designed primaráily as transports for long ocean voyages, proved incredibly durable in the battles and in the great storms on the voyage home; most survived the ordeal.

Galleons were constructed from oak (for the keel), pine (for the masts) and various hardwoods for hull and decking. Hulls were usually carvel-built. The expenses involved in galleon construction were enormous. Hundreds of expert tradesmen (including carpenters, pitch-melters, blacksmiths, coopers, shipwrights, etc.) worked day and night for months before a galleon was seaworthy. To cover the expense, galleons were often funded by groups of wealthy businessmen who pooled resources for a new ship. Therefore, most galleons were originally consigned for trade, although those captured by rival states were usually put into military service.

The most common gun used aboard a galleon was the demi-culverin, although gun sizes up to demi-cannon were possible.

Because of the long periods often spent at sea and poor conditions on board, many of the crew sometimes perished during the voyage; therefore advanced rigging systems were developed so that the vessel could be sailed home by an active sailing crew a fraction of the size aboard at departure. 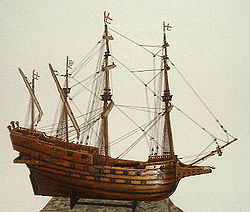 The most distinguishing features of the galleon include the long beak, the lateen-rigged mizzenmasts, and the square gallery at the stern off of the captain cabin. In larger galleons, a fourth mast was added, usually a lateen-rigged mizzen, called the bonaventure mizzen.

The galleon continued to be used into the 18th century, by which time purpose-built vessels such as the fluyt, the brig and the full rigged ship, both as a trading vessel and ship of the line, rendered it obsolete for trade and warfare respectively.

The oldest known scale drawings in England are in a manuscript called "Fragments of Ancient Shipwrightry" made in about 1586 by Mathew Baker, a master-shipwright. This manuscript, held at the Pepysian Library, Magdalene College, Cambridge, provides an authentic reference for the size and shape of typical English galleons built during this period. Based on these plans, the Science Museum, London has built a 1:48 scale model ship that is an exemplar of galleons of this era.[1]