HMS Sovereign of the Seas

From SpottingWorld, the Hub for the SpottingWorld network...
Jump to:navigation, search
For other ships of the same name, see Sovereign of the Seas, HMS Royal Sovereign, and HMS Sovereign.

Sovereign of the Seas was ordered as a 90-gun First Rate ship of the line of the English Royal Navy,[1][4] but at launch was armed with 102 bronze guns, at the insistence of the king.[4] She was later renamed Sovereign, and then Royal Sovereign. [4] The ship was launched on 13 October 1637 and served from 1638 until 1697, when a fire burned the ship to the waterline at Chatham.

Sovereign of the Seas was ordered in August 1634 on personal initiative of Charles I of England, who desired a giant Great Ship to be built. The decision provoked much opposition from the Brethren of Trinity House, who pointed out that "There is no port in the Kingdome that can harbour this shipp. The wild sea must bee her port, her anchors and cables her safety; if either fayle, the shipp must perish, the King lose his jewel, four or five hundred man must die, and perhaps some great and noble peer".[5] But the King overcame the objections with the help of John Pennington and from May 1635 she was built by Peter Pett (later a Commissioner of the Navy), under the guidance of his father Phineas, the king's master shipwright, and was launched at Woolwich Dockyard on 13 October 1637. As the second three-decked First Rate (the first three-decker being Prince Royal of 1610), she was the predecessor of Nelson's Victory, although Revenge, built in 1577 by Mathew Baker, was the inspiration providing the innovation of a single deck devoted entirely to broadside guns.

She was the most extravagantly decorated warship in the Royal Navy, completely adorned from stern to bow with gilded carvings against a black background, made by John Christmas and Mathias Christmas after a design by Anthony van Dyck. The money spent making her, £65,586, helped to create the financial crisis for Charles I that contributed to the English Civil War. Charles had imposed a special tax, the 'Ship Money', to make possible such large naval expenditure. The gilding alone cost £6,691, which in those days was the price of an average warship. She carried 102 bronze cannon (King Charles explicitly ordered such a high number)[4] and was thereby at the time the most powerfully armed ship in the world. The cannon were made by John Browne. By 1642 her armament had been reduced to 90 guns.[1] Until 1655, she was also exceptionally large for an English vessel; no other ships of Charles were heavier than the Prince Royal. 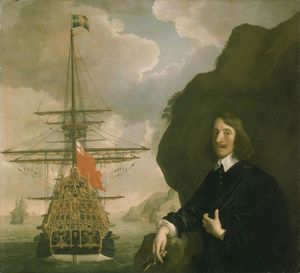 The Sovereign of the Seas was not so much built because of tactical considerations, but as a deliberate attempt to bolster the reputation of the English crown. Her name was in itself a political statement as Charles tried to revive the perceived ancient right of the English kings to be recognised as the 'lords of the seas.' English ships demanded that other ships strike their flags in salute, even in foreign ports. The Dutch legal thinker Hugo Grotius had argued for a mare liberum, a sea free to be used by all. As such a concept was mainly favourable to Dutch trade, in reaction John Selden and William Monson in 1635 with special permission of Charles published Mare Clausum ("the Closed Sea"), a book, earlier repressed by James I, trying to prove that King Edgar had already been recognised as Rex Marium, or "sovereign of the seas". The name of the ship explicitly referred to this dispute; King Edgar was the central theme of the transom carvings.[6]

Rear-Admiral Sir William Symonds noted that after the ship's launch she was "cut down" and made a safe and fast ship. In the time of the Commonwealth of England all ships named after royalty were renamed; it was first decided to change the name of the ship into Commonwealth, but in 1650 it became a simple Sovereign.[7] In 1651 she was again made more manoeuvrable by reducing the number of cannon and upperworks after which she was described as "a delicate frigate (I think the whole world hath not her like)".[8] She served throughout the wars of the Commonwealth and became the flagship of General-at-sea Robert Blake. She was involved in all of the great English naval conflicts fought against the United Provinces and France, referred to as 'The Golden Devil' (den Gulden Duvel) by the Dutch.

When, during the First Anglo-Dutch War, on 21 October 1652 the States-General of the Netherlands in a secret session determined the reward money for the crews of fireships that succeeded in destroying an enemy vessel, the Sovereign was singled out: an extra prize of 3000 guilders was promised 'in case they should ruin the ship named the Sovereign'.[9] The ship had not seen action during the Civil War and first fought in the Battle of the Kentish Knock when she ran aground on the Kentish Knock itself.[10] Although repeatedly occupied by the Dutch in the fiercest of engagements the Sovereign was retaken every time and remained in service for nearly sixty years as the best ship in the English fleet. By 1660 her armament had been increased to 100 guns.[1] After the English Restoration she was rebuilt at Chatham in 1660 as a First Rate ship of the line of 100 guns,[2] with flatter gundecks and renamed Royal Sovereign.

She was smaller than Naseby (later renamed Royal Charles), but she was in regular service during the three Anglo-Dutch Wars, surviving the Raid on the Medway in 1667 by being at Portsmouth at the time.[11] She underwent a second rebuild in 1685 at Chatham Dockyard, relaunching as a First Rate of 100 guns,[3] before taking part in the outset of the War of the Grand Alliance against Louis XIV of France. For the first time she ventured into the Irish Sea,[12] and later participated in the Battle of Beachy Head (1690) and the Battle of La Hougue, when she was more than fifty years old. In that period she was the first ship in history that flew royals above her topgallant sails.[citation needed]

Sovereign became leaky and defective with age during the reign of William III, and was laid up at Chatham, ignominiously ending her days, on 27 January 1697,[3][4] by being burnt to the water line as a result of having been set on fire either by accident, negligence or design. Some part of the popular folklore attributes the fire to an overturned candle.[citation needed]

In her honour, Naval tradition has kept the name of this ship afloat, and several other subsequent ships have been named HMS Royal Sovereign.

Wikimedia Commons has media related to:
[[Commons: Category:HMS Sovereign of the Seas (1637)