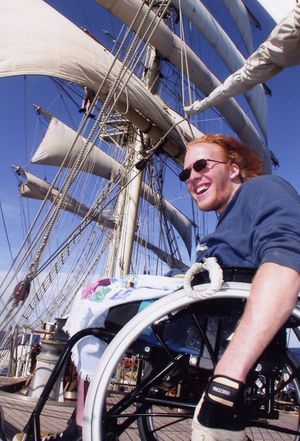 The SV Tenacious is a British wooden ship and is specially designed to accommodate the disabled. It is 65 metres (213.25 feet) long, including bowsprit. Its deck is 49.85 metres long, its hull is 54.02 metres long, and it has a beam of 10.6 metres at its widest point. A press release from the Belfast Maritime Festival on June 22, 2006 announced that the SV Tenacious was "the largest wooden ship still afloat".[1]

The SV Tenacious displaces about 690 tons and is allegedly the largest ship of her kind built in the United Kingdom in the last 100 years. Its first voyage was in September 2000. It is owned by the UK-based charity, the Jubilee Sailing Trust, which also owns the 42 metre long tall ship STS Lord Nelson (length including bowsprit is 55 metres and waterline length is 37 metres).[1] [2]

The Tenacious featured in the first episode of channel 5's Sea Patrol UK, one of the crew members had fallen ill and needed to be winched into an RAF Westland Sea King and taken to hospital. Which due to the height of the masts and rigging posed a challenge to the helicopters pilots and winch crew. The rescue attempt was successful and the crew member survived a potentially fatal condition.