MS Thomson Dream is a cruise ship currently owned by Costa Cruises and operated under charter by Thomson Cruises.[4] She was built in 1986 at the Meyer Werft shipyard in Papenburg, West Germany as MS Homeric for Home Lines. In 1988 she was sold to Holland America Line and renamed MS Westerdam. In 1990 she was lengthened by 36.9 m (121 ft 1 in) at Meyer Werft. In 2002 she was transferred to the fleet of Costa Cruises and renamed MS Costa Europa.[3][8] In April 2010 she left the fleet of Costa Cruises on a ten-year charter to Thomson Cruises.[1]

The Homeric was planned during the first half of the 1980s as a replacement for the aging SS Oceanic in the Home Lines' fleet.[9] Meyer Werft in Papenburg, West Germany was chosen as the shipyard to build her.[3][8] The ship was named in honour of the company's earlier SS Homeric, a popular ship that had been destroyed by a fire in 1973.[9][10] The new Homeric was launched on 28 September 1985. She performed her sea trials between 26 December and 30 December 1985, but was not delivered to Home Lines until 6 May 1986.[3]

Following the sale of the ship to Holland America Line (and the sale of HAL itself to the Carnival Corporation), the ex-Homeric, now named Westerdam, returned to Meyer Werft on 30 October 1989 for a $84 million refit. The ship was lengthened by36.9 m (121 ft 1 in) and many of her interiors were rebuilt. The refit was completed on 12 March 1990.[3][5][8]

In 2002, prior to entering service as Costa Europa for Costa Cruises, the ship received a £5 million refit, with some of the public rooms redecorated and six balcony suites added.[5][8][10]

File:Ship model homeric.JPG
A model of the Homeric as built.

During her service with Home Lines the Homeric was used for cruises from New York to Bermuda during the northern hemisphere summer season and cruises in the Caribbean during the rest of the year.[8] The success of the Homeric in service with Home Lines has been questioned, with one author describing her as the "giant swan song" of the company.[10] Whether the fault of the ship or something else, Home Lines was purchased by the Holland America Line in 1988.[8]

In November 1988 the Homeric joined the fleet of Holland America Line and was renamed Westerdam (different sites state different dates for her transfer to the HAL fleet). In service with her new owners, the Westerdam cruised to Alaska during the summer season, returning to the Caribbean for the winter. Soon after Home Lines had been purchased by Holland America, HAL itself was purchased by theCarnival Corporation. HAL's new owners decided to invest heavily in the fairly new Westerdam, and between October 1989 and March 1990 she was extensively rebuilt and enlarged at Meyer Werft.[3][8] When the Westerdam entered service for HAL, she was registered in The Bahamas, but in 1996 she was re-registered to the Netherlands.[3]

In 2002, following the delivery of several newbuilds for Holland America Line, the Westerdam was transferred to the fleet of Costa Cruises.

Following the transfer to Costa Cruises in April 2002, the Westerdam was renamed Costa Europa and re-registered in Italy. On 27 April 2002 she started on her first cruise for her new owners from Genoa, subsequently being used for cruises around Europe.[3][8]

In February 2009, Costa Europa had engine trouble on an Indian Ocean cruise and passengers mutinied after scheduled stops were cancelled.[11]

On February 26, 2010, Costa Europa collided with a dock at Sharm al-Sheikh in Egypt, after attempting to dock in bad weather. The collision killed three crew members and injured at least four other people, three of them passengers. The incident tore a two-meter wide hole in the hull, and the ship was listed to port to lift the damaged area clear of the water.[12][13]

Costa Europa left the fleet of Costa Cruises in April 2010, being Bareboat chartered to the United Kingdom-based Thomson Cruises for ten years. The charter agreement also includes an option for Thomson Cruises to buy the ship after five years.[1] The ship was renamed Thomson Dream for her service with Thomson.[2]

The Homeric was built with a terraced forward and rear superstructure, with lifeboats placed fairly high. She had a relatively large funnel, with a large arch behind it to deflect some soot away from the rear decks. In original Home Lines livery she had a white hull and superstructure, with a blue decorative riband separating them. Her funnel and radar mast, the structures immediately below them and the cranes on her forward deck were painted yellow. The ship's name was painted in tall letters on the side of the superstructure below the radar mast.[3][8]

On entering service with Holland America Line, the Westerdam received HAL's dark blue hull colours, with her funnel and radar mast painted white. The 1989-1990 lengthening altered her exterior appearance somewhat. The windows of the added section are larger than those forward and aft.[5]

As Costa Europa, the ship was painted all-white, with a yellow funnel and a small flag of the EU painted on the side of the superstructure.

As Thomson Dream the ship retains an all-white livery, but with a blue funnel bearing the TUI/Thomson group logo.[citation needed]

Unusually for a cruise ship of her time, the Homeric was built with a somewhat ocean liner-like layout, with her dining room in particular reflecting liner-like design.[8] She was also built with a sizeable promenade deck and a one-deck-high theatre. She was built with two swimming pools, one to the rear of the ship and another amidship which was covered with a magrodome.[5][8]

During the 1989-1990 refit, two lounges in the forward section of the ship were combined to create a large two-level theatre, with the original theatre retained as a cinema.[8] In HAL service, she was decorated with artworks drawing on the history of the Dutch Empire.[10] On entering service with Costa Cruises, the ship was refurbished, with some of the interior decorations changed to brighter and more European style.[5] The original theatre was built in with six balcony suites, and a new ballroom with a hardwood dance floor replaced an earlier lounge.[5][8] Despite the refit, most of the ship's decorations have been retained from the HAL days, resulting in the Costa Europa having somewhat different interior decorations from her "Italian-style" fleetmates.[5][10] 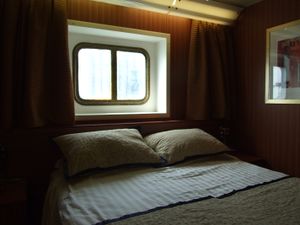 A Deluxe Cabin aboard Thomson Dream