RMS Atlantic was a transatlantic ocean liner of the White Star Line that operated between Liverpool, United Kingdom, and New York City, United States. During the ship's 19th voyage, on 1 April 1873, it ran onto rocks and sank off the coast of Nova Scotia, killing 535 people. It remained the deadliest civilian maritime disaster in history until the sinking of the SS Norge in 1904.

The Atlantic was built by Harland and Wolff in Belfast in 1870, and was the second ship built for the newly reborn White Star Line. She was powered by a steam engine producing 600 horsepower driving a single propeller, along with four masts rigged for sail. She sailed for New York on her maiden voyage on 8 June 1871. 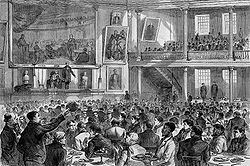 The Wreck of the "Atlantic" -- Breakfast to Survivors in Faneuil Hall, Boston, 1873 engraving

On 20 March 1873 the Atlantic departed on her 19th voyage from Liverpool with 952 people onboard, of whom 835 were passengers. En route, the crew decided to make port at Halifax, Nova Scotia to replenish coal for the boilers.

During the approach to Halifax on the evening of March 31 the captain and 3rd officer were on the bridge until midnight, while the Atlantic made her way through a storm, proceeding at 12 knots (22 km/h) for the entrance of Halifax harbour, experiencing intermittent visibility and heavy seas. Unbeknownst to the crew or passengers, the Atlantic was approximately 12½ miles (20 km) off-course to the west of Halifax Harbour. Officers failed to take soundings, post a masthead lookout, reduce speed or wake the captain as they near the unfamiliar coast. They somehow did not spot the Sambro Lighthouse, the large landfall lighthouse which warns mariners of the rocky shoals to the west of the harbour entrance.

At 2:00 a.m. local time on 1 April 1873, the Atlantic struck an underwater rock called Marr's Head 50 metres from Meagher's Island, Nova Scotia. Lifeboats were lowered by the crew but were all washed away or smashed as the ship quickly filled with water and flipped on its side. Survivors were forced to swim or climb ropes first to a wave-swept rock and then to a barren shore. Residents of the tiny fishing village of Lower Prospect and Terrence Bay soon arrived to rescue and shelter the survivors but 535 people died, leaving only 371 survivors.[1]. The ship's manifest indicates that of the 952 aboard, 156 were women and 189 were children on board (including two who had been born during the voyage). All women and all children perished except for one ten-year-old boy, John Hindley. Ten crew members were lost, while 131 survived.[2] This was the worst civilian loss of life in the Northern Atlantic until the wreck of Norge on Rockall on 28 June 1904. The Canadian government inquiry concluded with the statement, "the conduct of Captain Williams in the management of his ship during the twelve or fourteen hours preceding the disaster, was so gravely at variance with what ought to have been the conduct of a man placed in his responsible position".

Recovery of the Dead

Recovery and burial of the large numbers of victims took weeks. Divers were paid rewards for recovering the many bodies trapped within the hull. According to one newspaper account, a body of one of the crew members was discovered to be that of a woman disguised as a man. "She was about twenty or twenty-five years old and had served as a common sailor for three voyages, and her sex was never known until the body was washed ashore and prepared for burial. She is described as having been a great favorite with all her shipmates, and one of the crew, speaking of her, remarked: 'I didn't know Bill was a woman. He used to take his grog as regular as any of us, and was always begging or stealing tobacco. He was a good fellow, though, and I am sorry he was a woman."[3]

A young doctor from Germany, Emil Christiansen, had been listed as dead in transcripts of the passenger lists sent to newspapers, but it appears he had survived. Apparently, Dr. Christiansen had survived the wreck with only a broken arm and left for the United States. It is believed that he did not speak very much English and did not know to report his status to the proper authorities. It is not known how he traveled to the United States, but it is known that he married in 1876 and had four children. A descendant of Dr. Christiansen had visited the SS Atlantic Heritage Park and Interpretation Centre and pointed out the error in the passenger list at the museum site. Also, the spelling of the name was different on the passenger list transcripts, possibly leading to some confusion; on various copies of the list, it had been sometimes spelled "Emile Christianson". Many names on the list were spelled phonetically; perhaps there are more cases of mistaken identity.

RMS Atlantic was the second liner commissioned by White Star (Oceanic being first) but carried the notoriety of being the first White Star Line steamer to sink. (The company had previously lost the clipper RMS Tayleur in Dublin Bay in 1854). Other White Star Line ships lost in the North Atlantic include SS Naronic, RMS Republic, and RMS Titanic.

Today, most of the ship lies heavily fragmented under 40 to 60 feet of water.[4] Artifacts recovered from several salvage operations are on display at the Maritime Museum of the Atlantic in Halifax, Nova Scotia and also at the SS Atlantic Heritage Park and Interpretation Center, in Lower Prospect, Nova Scotia. A monument to the wreck is located at the mass grave near the interpretation centre in the Lower Prospect Anglican Cemetery while a smaller monument marks a second mass grave at the Catholic cemetery.