SS Georgia was an oil tanker lost off the coast of Norfolk, England at Haisborough Sands in November 1927.

The ship began life as hull No. 82 in the shipyard of the Newport News Shipbuilding and Drydock Company of Newport News, Virginia in the United States of America. She was ordered in 1907 by the Texas Co. Inc. of Port Arthur, Texas, U.S.A.

She was first given the name Texas. She was delivered on 18 July 1908 and she successfully made her maiden voyage without incident. She was soon re-named and became the SS Georgia. In February 1918, while owned by the Texas Oil Company (Texaco) of New York City, the ship was inspected for possible United States Navy service and assigned the registry ID 2316. Though the Navy ordered her acquisition, this action was cancelled shortly before 11 November 1918 Armistice brought World War I's fighting to an end, and she remained in commercial service. In 1922 it was reported that the ship's name had been changed to SS Texaco. She then passed into new ownership and was again re-named back to SS Georgia. Her new owners were the M.V. Dutch Tanker & Oil Company Ltd., of Amsterdam, in the Netherlands. Her home port was now Rotterdam.

In September 1927 Georgia was at the port of Abadan in the Khuzestan province in south western Iran (Persia). Here she took on a cargo of crude oil and she set off on her voyage bound for the port of Grangemouth, Scotland, to the oil refinery located there. By 20 November she was caught in a vicious gale in the North Sea with the consequence that the ships steering gear broke. With the crew having no control of her, just before midnight, she ran aground on Haisborough Sands and was stuck solid. So sudden and violent was the impact when she ran aground, the radio operator had been unable to send a distress call out on the radio as the aerials had been carried away by the storm. For several hours she was bumped and pounded as the heavy sea battered her hull, and eventually the hull was ripped apart amidships. She was still sounding her siren as a distress signal, but the two halves slowly drifted apart and were soon out of sight of each other, the stern section being carried away by the force of the gale. The bow section remained stuck on the sand bank with huge seas washing over it. The bow section had the captain, Harry Kissing and fourteen of the crew all crouched in the fo’c’s’le. The other sixteen members of the crew were in the adrift stern section. The next morning (21 November) the steamer Trent spotted the drifting stern section and lifted the 16 crewmen to safety. The Trent then steamed on to the bow section stuck on the sand bank. In the meantime the stern section had drifted North West and was spotted off Cromer. 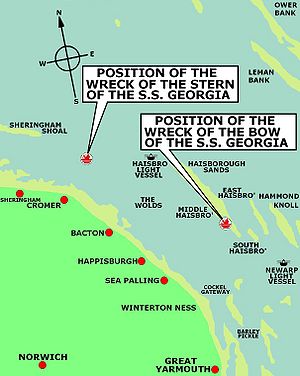 Position of the two halves of the SS Georgia

Henry Blogg, coxswain of the Cromer lifeboat H F Bailey, attending to the stern reported at 3.15 p.m. that the ship had been abandoned although at this time they were unaware that the ship was in two halves as the stern was creeping higher into the air. The Cromer lifeboat attended the stern section all that night warning shipping of the danger. Back at the bow section the Great Yarmouth coastguard had learned of the disaster at 9 p.m. and the Gorleston lifeboat had been called to assist. Trent had wirelessed a message to warn that it was to dangerous to approach the stricken stern and it made for Cromer to land the rescued men from the stern section.

On the morning of the 22 November the Gorleston lifeboat attempted to rescue the remaining 15 crew, now taking shelter in the chartroom, the highest point on the ship out of the water. Coxswain Billy Fleming tried to use the lee provided by the close by Trent, but with the seas still heavy this proved to be too dangerous, and she stood off to wait until conditions improved. Another attempt was made at midday, and on the fifth attempt they managed to get a line to the stranded section. Hopes were dashed when a huge wave picked up the lifeboat and dropped her in a trough which snapped the line. The Gorleston boat then developed engine trouble and dropped away from the rescue. It was not until around 4.30 pm that the crew were finally rescued by the exhausted crew of the Cromer lifeboat. Blogg and his crew had stood by the stern section all night, and then after returning to Cromer, were immediately called back out to attend the bow. The H F Bailey was considerably damaged in the rescue, but got her crew and the rescued men safely back to Great Yarmouth by 7 pm. Both sections of Georgia sank beneath the waves in the following days.

Position of the wrecks today