The SS Mount Ida was a merchant ship built in 1938 by William Hamilton & Co. Ltd of Glasgow. She had a three-cylinder triple-expansion engine which gave a service speed of around 10.5 knots (19.4 km/h). Originally called the Arcscott, she was renamed Mount Ida after being bought by the Atlanticos Steam Ship Company Ltd, of Athens, Greece.

In early October 1939 Mount Ida, carrying a cargo of grain and timber, and with a crew of 29, left Vancouver, Canada, bound for the port of Leith, Scotland. On 9 October she had reached the North Sea and was close to the north -east coast of Norfolk. This is a particularly hazardous part of the North Sea, with many sand banks, on one of which Mount Ida ran aground.

Cromer lifeboat to the rescue

The alarm was given at 6:25 am, when the coastguard informed the coxswain of the Cromer lifeboat, Henry Blogg, that the Mount Ida had run aground and asked that the lifeboat be sent to assist her. Since the outbreak of World War II, lifeboats of the RNLI had been under the control of the naval authorities, and this was only the second rescue effort by the Cromer lifeboat under this arrangement. 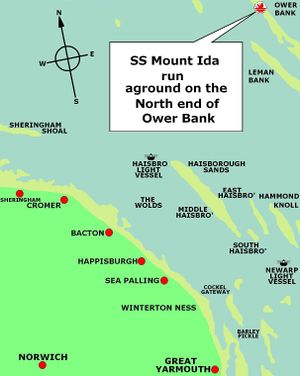 Position of the wreck of the SS Mount Ida

The H F Bailey crossed Leman Bank and reached the Mount Ida around 12:30 pm. By this time the ship's starboard lifeboat had been carried away, she was listing heavily to starboard and lying head on to the seas, and her position offered no lee for the lifeboat to come alongside. The H F Bailey made an attempt to throw a line to the stricken vessel but was twice struck by the heavy seas and flung back. Coxswain Blogg made another attempt to come alongside, before deciding that it was too dangerous and that he would have to wait for the sea to slacken.

By 2:15 pm conditions had improved and Blogg, using the lifeboat's powerful engines with great skill, was able to maintain a steady position alongside the ship for over an hour, during which time all 29 crewmen were brought off successfully, though one suffered crushed legs when he hesitated to descend the rope ladder and was trapped between the lifeboat and the Mount Ida; he later died of his injuries in Cromer Hospital.

During the rescue, the lifeboat was continually flung against the hull of the Mount Ida. Because the H F Bailey was badly damaged, Cromer’s no 2 lifeboat, Harriot Dixon, was called out to bring the rescued men ashore. The Harriot Dixon, too, was damaged as it was launched into heavy seas, but the rescue effort was successful.