SS Robin is the oldest complete steam coaster (a class of steamship that is licensed only for passage in coastal waters) in the world. Moored on the River Thames in England, it has recently opened as an education centre and photography gallery (June 2004).

Robin was built in 1890 by Thames Ironworks and Shipbuilding and Engineering Company Ltd. of Orchard House Yard, Bow Creek which is about a mile (2 km) from where it is currently moored. She is a steam vessel built for coastal trade and was built in a style that had been used since the 1840s. Ships similar to this were in constant use up to the 1940s.

She was built by Mackenzie Macalpine and Robert Thomson for Ponsonby and Co. of Newport, Monmouthshire. The Robin was towed to Scotland to have the engine, the boiler and the auxiliary machinery fitted by Gourlay Bros. of Dundee.

Her official number is 98185 and the port of registry is Glasgow. On the Lloyds register she is registered as TMS Robin – Tri Masted Schooner. It appears that this classification is incorrect, however: Robin is a steam vessel and was never a sailing auxiliary. Rather, the authors of the Board of Trade registration document appear to have taken note of her three masts—which were not used to hold sails—and assumed she was a schooner.[citation needed] 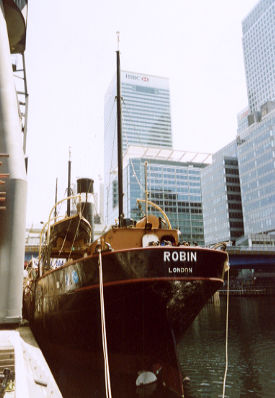 SS Robin was launched on 16 September 1890 and after being fitted out in East India Docks was towed to Dundee to have the engine and auxiliary machinery fitted.

A sister ship named Rook who was built at the same time foundered in a gale off Anglesey in 1925. Her maiden voyage started from Liverpool on December 20 1890.

As a coaster her range was limited to the coastal waters which basically means that if the crew cannot see land they are out too far into deep waters. However, on her first voyage she went 400 miles (600 km) outside the Home Trade limits to Bayonne and the owners had to replace Master mate with another who held the correct certificate, until she returned to Swansea on January 10.

Her second voyage began at Swansea on 14 January 1891 and went to the following places:

In 1892 the Robin was sold to Andrew Forrester Blackwater of Glasgow. Until 1900 her trading took place mainly between the seaports of Britain, Ireland and the continental ports and was reported to carry bulk cargoes of grain, iron ore, scrap steel, pits props, china clay, railway steel, general cargoes of casked and baled goods and even granite blocks for the Caledonian Canal.

In 1900 the Robin was sold to Spanish owners.

For the next 75 years or so she had three different Spanish owners and was renamed the Maria.

She operated around Bilbao and the north coast of Spain and worked until 1974. She was used for the carriage of coal for the bunkering of the liners.

During World War I she carried iron slabs for the French government from the foundry at Santiago to Bayonne and Burdeos, escorted by two destroyers to protect her from German U-boats. During the Spanish Civil War the ship was laid up at San Esteban de Pravia from 1935 to 1939.

Until 1965 the structure of the Robin stayed mainly unchanged, until in 1966 she had a major refit at which point the Whaleback (at the stern), and the mizzen mast were taken out, the foremast and the funnel were shortened and the forecastle were extended. As coal was expensive, the coal fired furnaces were modified for oil fuel. After this she resumed trading.

One of London’s best kept secrets, SS Robin is only one of three ships in London on the Core Collection of the National Historic Ships Register (the nautical equivalent of a Grade 1 Listed Building) – alongside Cutty Sark and HMS Belfast. One of a pair of ‘coasters’ built in Bow Creek at the height of the Industrial Revolution in 1890, the ship was originally intended to carry raw materials and the products of British industry around the UK and northern Europe. Three centuries later SS Robin is currently still afloat and moored under the towers of Canary Wharf in West India Quay.

A reminder of Britain’s proud maritime history, Robin is the oldest remaining complete steamship in the world, still boasting its original engine, lifeboats and winches.

In the latest chapter of its long history, Robin was converted into an innovative learning centre dedicated to working with children, providing technology-driven learning in East London. Pupils can attend workshops and learn the national curriculum through film, photography, animation and bluescreen CGI techniques. All details, including how to donate to the campaign, can be found at www.ssrobin.org

In 1890, steamships such as the Robin were the very latest in naval technology. In the days before HGVs, Robin carried cargo such as grain, coal, iron ore and china clay between sea ports in Britain and the continent. From 1900 to 1974, the ship was bought by a Spanish trading company and used as a coastal steamer around the northern Spanish coast. In 1974, the Maritime Trust saved the ship from the breakers yard and Robin returned to England.

Robin was discovered by the Maritime Trust in 1972. Following an inspection, it was decided that she was worth preserving and in May 1974 she was purchased, on the brink of being sold to Spanish breakers. In June 1974 she came home to St Katherine's Dock under her own steam and was renamed the SS Robin.

She was restored at a cost of £250,000 with most work taking place in 1974 and 1975 and was subsequently moored in St Katherine's Dock. A new mooring was offered in 1991 at West India Quay where SS Robin is moored today. The Robin is now listed on the core collection of the National Historic Ships register alongside Cutty Sark, HMS Belfast and Discovery.

David and Nishani Kampfner bought the Robin and set up the SS Robin Trust as a registered charity. HRH Prince Philip is an honorary member, and Jim Fitzpatrick MP and Channel 4 news reader Jon Snow are patrons.

An Education Centre and Gallery

Listed as part of the National Historic Fleet, Core Collection, the restoration of the superstructure of SS Robin began in March 2002. The original beams, structures, fittings and engine were preserved and restored by her volunteer crew.

The aim was to develop a learning centre and photojournalism gallery which ran an extensive programme of talks, seminars and workshops designed to build bridges between communities. The gallery is a 100 by 23 ft (30 by 7 m) flexible classroom and exhibition space within the steel hull.

The main objective of the learning centre and gallery was to use photography as an effective means of communication and education, with the aim of integrating communities, building skills and knowledge through a diverse programme of international photography exhibitions, workshops and talks. To date, the centre has worked with local schools and businesses to deliver an innovative interactive education programme.

Following a landmark agreement in May 2008, SS Robin can now carry out a much-needed structural restoration as a result of a loan from Crossrail. Without the compensation necessitated by the Crossrail construction proposals and negotiated during the hybrid Bill House of Lords Select Committee process it appeared likely that Robin would have to be scrapped after a bid for Lottery funding was turned down earlier this year.

The compensation from Crossrail will underwrite essential minimum repairs to the ship necessitated by the development of the Isle of Dogs station, due to be constructed in West India Quay, home berth of the unique coaster. However, further fundraising will be needed to repay the loan and continue the repair process.

The ship, a miraculous survivor and unique symbol of Britain’s Victorian merchant fleet, is one of only three ‘Grade One’ / Core Collection ships in London. Despite her historic importance as an irreplaceable example of the UK’s maritime and commercial heritage, her future until recently has been uncertain.

Before construction of the new station begins, SS Robin will be moved to a shipyard and taken out of the water in order that essential refurbishment of the 118 year-old hull can begin. The ship will be repaired using so far as is practicable largely the same craft skills with which she was built in 1890, ensuring that the restored ship remains a time-capsule of Victorian technology. SS Robin is likely to remain in drydock for six months, and then be towed back to London at the end of 2008 in order to continue the Trust’s learning programme with schools.

Following the successful partnership agreement with Crossrail, SS Robin will begin the first phase of her repairs with immediate effect.

Ahead of the ship’s move to drydock, SS Robin has contracted work to dismantle and de-rig the masts, funnel, lifeboats and davits to Cutty Sark Enterprises, beginning mid-late May 2008. Project Director David Kampfner said: “We are delighted to bring the expertise and professional knowledge of Cutty Sark’s conservation crew to the Robin project, beginning with this vital stage of the ship’s preparation for refit. We look forward to working closely with our friends onboard Cutty Sark to achieve this important milestone for SS Robin.”