TS Royalist is a brig owned and operated as a sail training ship by the Sea Cadet Corps of the United Kingdom.

Royalist was built by Groves and Guttridge, Cowes, Isle of Wight. She was designed by Colin Mudie RDI and launched on 3 August 1971 by Princess Anne.[2] In 1992, Royalist was taken out of the water for a refit, termed as a "Mid-Life Upgrade". Various facilities were improved, and she got a new coat of paint. Royalist was re-launched by Princess Anne, (now the Princess Royal). She is built of steel, with an overall length of 29 metres (97 feet) (not including the bowsprit, which adds about 8 metres onto her overall length), and has a traditional square-rigged brig layout.

Almost every week of the year, 24 Sea Cadets, Combined Cadet Force (Navy) and a single week of Air cadets from all over the UK join the ship and spend the whole week on board working as part of the team. Many different parts of the UK are visited, sailing from her home berth in Gosport to Southampton, Poole and the Isle of Wight.

Every week, there are two berths made available to Adults (18+) as Watch Officers.

In addition to the temporary crew, there are also 6 permanent members of crew. These are the Captain, the Sailing Master, the Engineer, the Boatswain, the Coxswain and the Cook. The former 3 members of crew are officers of the RNR, while the latter are Senior Rates of the SCC.

On 20 May 1996, Royalist ran aground in the River Severn some 3 nautical miles (5.6 km) north of the Severn Bridge near Oldbury Power Station. Twenty cadets were taken off by helicopter and lifeboat.[3]

On the evening of 2 May 2010 a 14 year old male Sea Cadet was killed, following a fall from the rigging whilst furling sails when the ship was anchored in Stokes bay, in the Solent. He was named the next day as Jonathan Martin.[4][5] The MAIB have opened an investigation into the accident.[6] 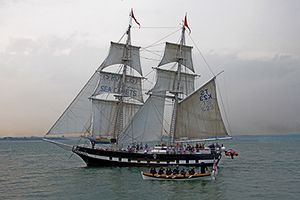 The TS Royalist during the Trafalgar 200 international fleet review

Trips abroad are also taken regularly, such as to the Channel Islands and to France, Belgium and in some cases, the Netherlands and Germany. Also, during the Tall Ships race period, Royalist can visit other countries of Europe.

For around four or five weeks of the year, for The Tall Ships' Races, Royalist becomes a racing ship. During this period, only cadets who are over 16 years of age are allowed to crew her. This period usually involves a crew taking her to the start of the race (1 week duration). Then, the race crew come onboard, and race Royalist against other Class A ships in the race, which are from all over the world (2 week duration). When the race finishes, yet another crew come aboard, and bring her back home (2 week duration).

Cadets can gain various qualifications when they complete a week on board TS Royalist, which are Offshore Hand 1, Offshore Hand 2, Offshore Seaman, and Offshore Watchleader. The only way to gain any further qualifications, is by getting day skippers, onboard TS Vigilant or the sister TS City Liveryman.