Ranger was built as the civilian steam-driven, steel-hulled yacht Thomas Slocum in 1910 by the Robert Jacob Shipyard at City Island in the Bronx, New York. She later was renamed Ranger. From 1917 to 1919, she served in the United States Navy as patrol vessel USS Ranger (SP-237), being renamed USS SP-237 in 1918. 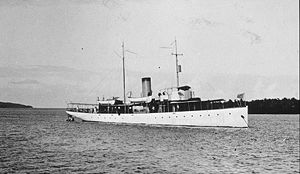 On 28 June 1922, Ranger joined the Coast and Geodetic Survey launch USC&GS Marindin in searching for survivors of the schooner Rose Standish, which had burned off Morro Point Light, Puerto Rico, although none were found. On 29 August 1924, she performed rescue work in the United States Virgin Islands -- primarily by transporting rescue personnel to outlying islands from St. Thomas -- after a hurricane passed through the area; she received a letter of thanks for her efforts from Philip Williams (1869-1942), the Governor of the U.S. Virgin Islands. On 28 February 1928, she assisted a gasoline launch on fire off Miami, Florida, putting out the fire so that the launch could be salvaged.