From SpottingWorld, the Hub for the SpottingWorld network...
Jump to:navigation, search
For ships with a similar name, see USS Niagara.

Niagara Falls was designed to deliver refrigerated stores, dry provisions, technical spares, and general stores type material to the Fleet at sea. Her configuration provided for rapid issue rates using a minimum of men and the latest in transfer-at-sea methods, cargo handling, storage techniques, and automation. She was capable of simultaneous replenishment of one ship on each side as well as transfer of material by cargo helicopters, which she carried.

Niagara Falls was laid down on 22 May 1965 at the National Steel and Shipbuilding Company in San Diego, California; launched on 26 March 1966; sponsored by Mrs. Jacob Javits, wife of the senior Senator from New York; delivered to the Navy at the Long Beach Naval Shipyard, Long Beach, California, on 20 April 1967; and commissioned on 29 April, with Captain Horace C. Holley in command.

By 4 February 1968, Niagara Falls completed her shakedown availability and continued preparations for her first deployment. She steamed for WestPac on 28 March, arrived at Subic Bay on 14 April, and there conducted the first of many replenishments.

Upon arrival on 22 April at An Thoi, South Vietnam, she transferred over 100 tons of material, and two days later she supplied amphibious units in Vung Tau. In Cam Rahn Bay 25 April, Niagara Falls supplied ships and the Naval Support Activity there. She also supplied ships of the Naval Gunfire Support Group off the Vietnam coast, and made several replenishment swings through the Yankee Station and Market Time areas.

Niagara Falls completed the last replenishment of her deployment on 15 September, called at Hong Kong from 17 through 21 September, at Pearl Harbor from 9–10 October, and arrived back at San Diego on 17 October. Completing preparations for another deployment and transfer of homeport to Sasebo to commence 3 January 1969 with the arrival of the New Year, Niagara Falls steamed for WestPac a second time.

On 14 September 1970, Niagara Falls found and rescued the 42-foot (13 m) sailboat Galilee that had been the object of an intense search for more than a month. When sighted, the boat was about 400 nautical miles (740 km) west/northwest of Honolulu. The three crew members had been without food since 27 July (the Galilee departed Tahiti on 17 June for Honolulu).

During the period July 15–30, 1971 Niagara Falls and Sacramento are noted by Enterprise operating at Yankee Station as conducting a complex four-helicopter VERTREP.

During the early 1970s the noted spy John Anthony Walker, Jr. served in Niagara Falls' radio room. It was during his three years aboard the Niagara Falls serving as Classified Materials Systems (CMS) Custodian that Walker had access to the various cryptographic machines (KW-7, KWR-37, KG-14, KY-8, and KL-47) providing the keys for nearly all of them to the KGB.[1] 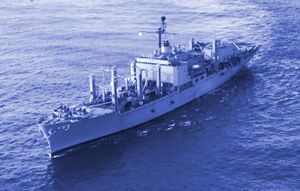 The Niagara Falls received the "7th Fleet Finest Combat Logistic Support Ship" award for her performance in PACEX-89, a combined US, Korean, and Japanese naval exercise which was the largest since the end of the Korean War. Included in PACEX-89 such notable ships as the New Jersey, Missouri, Enterprise and Nimitz. During PACEX-89 Niagara Falls was the command ship for the Underway Replenishment Group.

Due to the nature of the tasking of a combat stores ship, and the outstanding performance the Niagara Falls has provided in logistic support service, she has earned the nickname "Fighting Falls" by the U.S. Navy Seventh Fleet. Through 1991 the Fighting Falls had supported Seventh Fleet operations during 15 WestPac/Indian Ocean/Persian Gulf deployments. The Niagara Falls was awarded the Meritorious Unit Commendation as well as receiving the Battle "E" after an extended deployment for almost eight months followed immediately by another short fuse deployment.

Niagara Falls participated in the Tanker War phase of the Iran–Iraq War supporting Operation Prime Chance and Operation Earnest Will. In one near action the Niagara Falls crossed paths with an Iranian minelayer and during a tense hour the Fighting Falls prepared to defend herself. There was no exchange of fire, the intelligence on the minelayer was relayed by Captain Gay to the fleet and the Iranian ship was subsequently intercepted by US Navy combatant forces. Niagara Falls often visited Bahrain, Fujiarah, Muscat, and the obligatory Masirah Airhead Evolutions during this time.

Niagara Falls was one of the first non-depot ships to be assigned female crew members, starting with Lt-Cmdr. Carol Rengstorff as Executive Officer. Approximately 30 female sailors and officers were made part of the Niagara Falls crew shortly thereafter.

Niagara Falls participated in Operation Desert Storm, transiting the Straits of Hormuz at midnight on 16 January 1991 and assigned operating area of the North Persian Gulf. Due to limited mine countermeasure assets in the Gulf and the "Fighting Falls" operating area, an EODMU detachment was assigned. During the course of the war the Niagara Falls destroyed five naval mines herself while operating in the northern Persian Gulf.

One interesting incident on the 23 January was the visible flash of an explosion reported by the aft lookout, possibly an errant Scud missile which had been reported heading out into the Gulf.

On 29 March the Niagara Falls assisted the M/V Mercs Horana which was undergoing a major shipboard fire. The Falls arrived at night and the crew was presented with the sobering image of the Horana's superstructure fully engulfed in flames, and four other coalition ships, including the Shasta and Francis Hammond circling the burning vessel. Niagara Falls At-Sea Fire Party was told to stand ready to motorboat over, however the Commonwealth Coalition ship in charge at the scene declined the manpower and requested spare fire fighting foam be supplied.

For spending 143 days in the combat zone, and operating North of 28.30 N and West of 49.30 E between 17 January–28 February 1991 the ship was awarded the Combat Action Ribbon. During the course of the war the Niagara Falls primary assignment was the USS Missouri battlegroup, however she also serviced the Ranger, the Amphibious Group, and the hospital ships. During this period the Niagara Falls would mainly resupply from Jebel Ali near Dubai, however stops were also made at Bahrain and Abu Dhabi.

While returning from the Gulf War and enjoying a liberty call at Phuket, Thailand, when the volcano Mount Pinatubo erupted in the Philippines. The Niagara Falls duty crews loaded stores at Phuket while completing the liberty port call and immediately steamed to Subic Bay, Philippines to offload food and stores for the relief and recovery effort, named Operation Fiery Vigil. Even arriving in Subic Bay some days after the main eruption, the Falls was quickly covered in layer of ash reminiscent of a heavy snowfall.

Late 1991 to early 1992 the ship entered drydock for refit and overhaul. This saw the upgrade to refueling station capacities by adding an "arm" to one of the ship's "M" Frames.

In the spring and summer of 1992, the ship took a mini-Westpac cruise of the south-west Asian ports of Singapore, Hong Kong and Japan.

In August 1992, Typhoon Omar swept through the island of Guam. The ship was down for service to main gear and was unable to go to sea. The ship was torn from its mooring lines and swept across the main harbor, hitting a refueling barge and ultimately running aground on the lagoon's shallow shore. The damage to the ship was minimal, however her sister-ship, White Plains, was torn from its mooring lines and ran aground on hard coral beach in Apra Harbor.

Once made operational, the Niagara Falls sailed to the Yokosuka Naval Base's shipyard for further repairs and trials. The ship return to Guam in early September to load its stores for its next deployment. The ship left late September 1992 for the Persian Gulf.

On 19 April 1997, while conducting a VERTREP with Constellation one of the Falls UH-46E Sea Knight helicopters crashed into the sea. The crash occurred approximately 2,000 nautical miles (3,700 km) southwest of Hawaii and all four crew members were safely rescued. The helicopter crew members from Helicopter Support Squadron Five were rescued by the quick reaction of other CH-46 helicopters on-scene at the time of the incident. Assisting in the rescue was a motor-whale boat from Niagara Falls. The four crew members, who escaped injury, were transported to Constellation for medical observation and were released to the Niagara Falls the same day.

On 27 November 2001 Supply Officer Donald J. O'Brien retired from the Military Sealift Command aboard the Niagara Falls, thirty years after retiring from the U.S. Navy aboard the same ship.

Between 11 September and 27 November 2001 Niagara Falls broke both her Navy and TAR records for number of pallets moved with a total of 10,743 pallets, double the average number during a similar deployment time frame.

It was reported in April 2003 that Niagara Falls crewman had developed a unique external method for transporting mail during VERTREP to overcome differences of the SH-60 helicopters compared to the older, roomier HH-46 helicopters.

Niagara Falls was dispatched from Guam on 2 January 2005 in support of Tsunami Relief Operations (Operation Unified Assistance), ferrying relief supplies from Singapore to the Abraham Lincoln for distribution to the damaged areas.

On 27 October 2005 Niagara Falls ran aground while departing Malakal Harbor, Palau at 13:00 local time, but was able to free itself two days later at 16:20. There were no reports of injuries or leakage from the ship. Over the period of two days, the Niagara Falls transferred fuel and cargo aft within the ship, reducing the weight of the forward area of the ship. During the afternoon high tide period on 29 October, the ship was able to free itself under its own power and with the assistance of a local tug boat.

USNS Niagara Falls completed her last mission support operation in July 2008, and was deactivated at Pearl Harbor in September 2008.

As listed in the 1991 Change of Command Pamphlet.