The MV Kenilworth is a historic passenger ferry. Built in 1936 as MV Hotspur II, she was the Hythe Ferry service across Southampton Water until 1978. She was the Kilcreggan ferry on the Firth of Clyde until 2007.

MV Hotspur II was built in 1936 as a passenger ferry for the Hythe Ferry service across Southampton Water.

In 1978, she was bought by Clyde Marine Motoring and renamed Kenilworth, after the novel Kenilworth by Walter Scott. She served on the Gourock – Kilcreggan ferry service across the Firth of Clyde operated on behalf of Strathclyde Passenger Transport. She provided the main ferry service, with crossings of Gare Loch to Helensburgh and cruising in summer. Other company vessels (Clyde Marine Services Ltd. from 2003), including MV The Second Snark and CalMac vessels provided relief.

Replaced by MV Seabus in 2007,[1] she continued to provide morning and afternoon cruises. In 2009, she was reported to be sold to a new owner in Inverness.

One of the Kenilworth's half-sisters, MV Hotspur IV, is still reserve boat on the Hythe Ferry service.[4]

There is covered passenger accommodation on two decks forward, with a bar in the lower saloon. 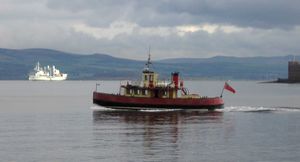 Setting out from Gourock on 23 October 2006, with naval supply ship Fort George in the background.

At 9.40 am BST on 23 October 2006 a US Navy warship taking part in the Neptune Warrior training exercise radioed the Kenilworth to warn "'Unidentified vessel approaching on my starboard side, please identify yourself. If you fail to do so, we will open fire on you with live ammunition.'" The message caused alarm as it was broadcast on VHF channel 16, the international calling and distress frequency. A spokeswoman at Faslane indicated that channel 16 had been correctly used to request identification, but should not have been used for the warning which should have been on an exercise frequency. She stated that the ferry had not been in any danger, and advised that the organiser of the exercise, Commander Don Chalmers, deputy director of the Joint Maritime Operational Training Staff, had apologised to the skipper.[5]