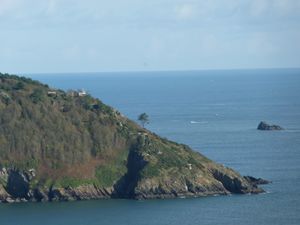 The Brownstone Battery complex from across the Dart estuary. The Forward Point lookout is the building with the flag pole

NCI Froward Point is a busy National Coastwatch Institution (NCI) lookout station at Froward Point[1] at the easterly side of the mouth of the River Dart two miles from Kingswear in Devon in England. Its twin duties are to maintain an hours of daylight watch over the local coastal area and the South West Coast Path on whose route it lies.[2][3] With some significant blind spots because of the coastline, NCI Froward Point covers the coastline from Start Point in the West towards Brixham in the East.[4]

The area of operation has a mixed boating population of a fishing fleet, recreational yachtsmen, both sail and power, yacht racing fleets, small commercial passenger vessels, kayaks, canoes, military vessels, dinghy racing fleets, racing gigs, small boats and inflatables, powered and unpowered. During the summer months the recreational seafarers make the lookout both busy and an important resource. In addition there are regular visits to the River Dart by passenger cruise liners during the cruising months.[5] The high number of boating movements makes the mouth of the Dart and the surrounding headlands places of high risk. While not involved in traffic management, NCI Froward Point alerts Brixham Coastguard both to potential incidents and incidents in progress.

The Froward Point lookout became operational in July 2005[6][7] with planning going back to 2002.[8] It is one of a growing number of NCI lookout stations on the coast of the United Kingdom.

NCI Froward Point works closely with HM Coastguard at Brixham, and the Dart Lifeboat, and is a accredited with Declared Facility Status[14] which allows full participation on UK Search and Rescue incidents

The station is equipped with fixed and handheld VHF radios,[15] a pair of mounted telescopes, binoculars, a radar set and a weather station.[16] The weather station updates the lookout's website with weather data every minute or so via a microwave link to a broadband connection as an important real time service to seafarers. A webcam, updating images at the same interval, provides a visual check on sea state and weather.[17] With no mains electricity to the site solar panels are used and a diesel generator is run when necessary.

The lookout station maintains a visitor centre with information about both its operations and also the Brownstone Battery itself.[18][19]

When not monitoring the surrounding area for people at risk, watch keepers record sightings of seals, cetaceans and other wildlife for relevant wildlife organisations.

NCI Froward Point has been involved in the following incidents: