The MS Pacific Sun is a Holiday class cruise ship operated by P&O Cruises Australia. She was built in 1986 by Kockums Varv, Malmö, Sweden for Carnival Cruise Lines as MS Jubilee. At 47,000-tons, the Pacific Sun is a medium sized ship, accommodating up to 1,900 passengers from Australia and/or New Zealand. Pacific Sun currently operates cruise itineraries to the South Pacific and Queensland. She is currently based out of Brisbane. After receiving a muti-million dollar makeover she is currently sailing in all white colours, like P&O's other ships, along with new amenities[3] 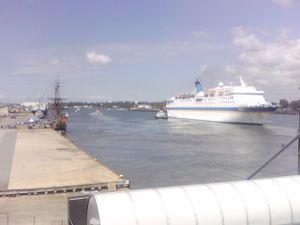 The Pacific Sun at Portside Wharf, Brisbane with the HM Bark Endeavour replica

Pacific Sun arrived in Australia in November 2004, and began year-round cruises from Sydney to the South Pacific and tropical north Queensland. Pacific Sun's relocation to Brisbane has seen her become the largest year-round liner ever to be based in Queensland.