From SpottingWorld, the Hub for the SpottingWorld network...
Jump to:navigation, search
File:Pontoon boat.jpg
A pontoon boat, like this small pleasure boat, typically floats and balances by means of two pontoons mounted lengthwise.

A pontoon is a flat-bottomed boat or the floats used to support a structure on water. It may be simply constructed from closed cylinders such as pipes or barrels or fabricated as boxes from metal or concrete. These may be used to support a simple platform, creating a raft. A raft supporting a house-like structure is one form of houseboat. The basic design is usually implemented as a simple catamaran or, with three rows of floats, a trimaran. A fixed platform can be used as a dock.

Pontoon boats generally are low cost and less expensive to insure than a normal boat[citation needed], even when equipped with engines of over 200 hp. Their shallow draft, usually about 8", also reduces damage from submerged collisions and being run aground. As such, they are the most popular vessel style for rental operations on US freshwater waterways[citation needed]. They are also popular with partygoers. They also offer the largest value in terms of capacity to price[citation needed]. As a result pontoons are typically purchased for pleasure boating rather than serious fishing[citation needed].

Pontoon boats are also used as small vehicle ferries to cross rivers and lakes in many parts of the world, especially in Africa. Pontoon ferries may be motorised, such as the Kazungula Ferry across the Zambezi River, or powered by another boat, or pulled by cables. A type of ferry known as the cable ferry (called 'punts' in Australia and New Zealand) pull themselves across a river using a motor or human power applied to the cable, which also guides the pontoon. Pontoon boat designers need to consider the pontoon effect.

The 1952 invention of the pontoon motorboat in the USA is credited to a farmer who lived on the Horseshoe Chain of Lakes, near Richmond, Minnesota. Ambrose Weeres had the idea to put a wooden platform on top of two columns of steel barrels welded together end to end, thereby creating a sturdy deck that would be more stable on a lake than would a conventional boat. This idea proved to be correct.

As he lived in the "land of 10,000 lakes," Weeres thought this idea might have some potential to be marketed. He started out by building a few boats and sold them with the help of select dealers. He named his first boat "The Empress." Weeres did not realize at first how popular these boats would quickly become. He couldn't keep up making them, so he started his own company, Weeres Industries. Some time later, Ambrose Weeres, now called "Mr. Pontoon," was elected to the Minnesota Marina Hall of Fame.[1] 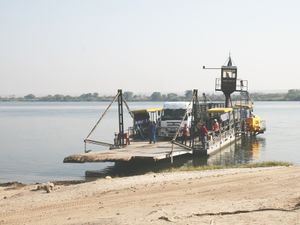 Floatplane – a seaplane supported by pontoons.