A cable ferry is guided and in many cases propelled across a river or other larger body of water by cables connected to both shores. They are also called chain ferries, floating bridges, or punts.

Early cable ferries often used either rope or steel chains, with the latter resulting in the alternate name of chain ferry. Both of these were largely replaced by stronger and more durable wire cable by the late 19th century.

There are three types of cable ferry: the reaction ferry, which uses the power of the river to tack across the current; the powered cable ferry, which uses an engine or electric motors (e.g., the Canby Ferry) to wind itself across; and fast disappearing is the hand-operated type, such as the Stratford-upon-Avon Chain Ferry in the UK and the Saugatuck Chain Ferry in Michigan, USA.

Both of the last two types use powered cogs or drums on board the vessel to pull itself along by the cables. The cables or chains have a considerable amount of slack built into them, in order that they sink below the surface as the ferry moves away, allowing other vessels to pass without becoming grounded, snared or trapped. Where a ferry carries both passengers and vehicles the car deck occupies the centre (helping to balance the vessel) and two passenger areas are at the sides, over the tunnels for the chains and the engines. As the ferry cannot steer a ramp is built at both ends, and there is usually a set of controls facing in either direction.

Ferries are common where there is little other water-borne traffic that could get snagged in the cable or chains, where the water may be too shallow for other options, or where the river current is too strong to permit the safe crossing of a ferry not attached to the shore. Alignment of the platform at each end of the journey is automatic and, especially for vehicle ferries, safer than a free-moving ferry might be in bad conditions.

Cable ferries have probably been used to cross rivers and similar bodies of water since before recorded history. Examples of ferry routes using this technology date back to the 13th century (Hampton Ferry in England).

In the early 1900s a cable ferry designed by Canadian engineer William Pitt, was installed on the Kennebecasis River near Saint John, New Brunswick in Canada.[1] There are now eight cable ferries along the St John River system in southern New Brunswick.

Most of the road crossings of the Murray River in South Australia are cable ferries operated by the state government using diesel engines. The platforms at the ends can be moved up or down according to the water level.

In Canada a cable ferry is proposed to transport automobiles across the Ottawa River in Ontario. There are several in BC: two on the Fraser, one at Lytton, one at Big Bar, three on Arrow Lakes. A suspended cable ferry worked until the 1980s in Boston Bar. A small seasonal cable ferry carries cars across the Rivière des Prairies from Laval, Quebec (Sainte-Dorothée neighbourhood) to Île Bizard (part of Montreal). Dozens of cable ferries operated on the Columbia River in the US northwest, and most have been rendered obsolete by bridges. A suspended cable ferry for railway cars crossed the American River in Northern California.

In the fishing village of Tai O on Lantau Island, Hong Kong, a cable ferry (橫水渡) crossed the Tai O River before a bascule bridge was built. 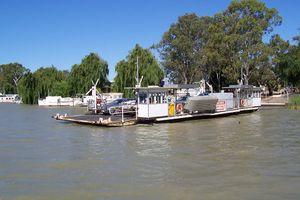 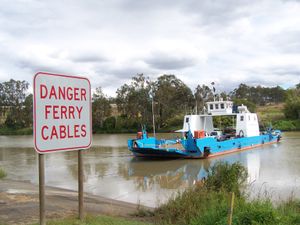 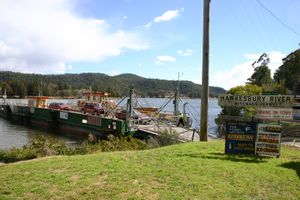 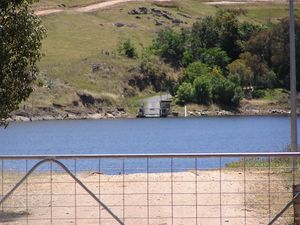 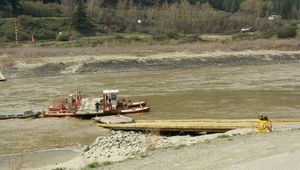 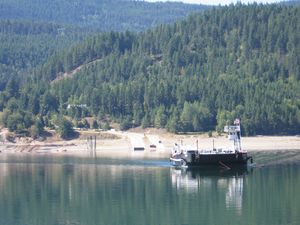 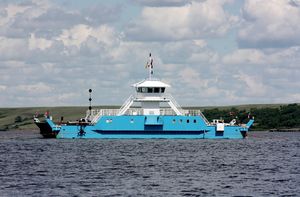 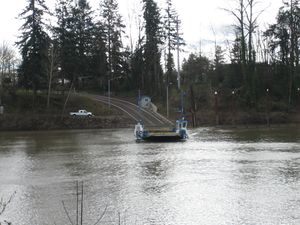