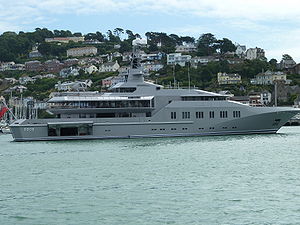 The Skat is a luxury yacht built by Lürssen of Bremen, Germany as project 9906, a number prominently displayed on the hull in a font matching that of military vessels. The project started in November 1999 and the yacht launched in 2001. The owner is Charles Simonyi, a former Software Engineer from Microsoft and the fifth space tourist. The yacht is the 64th-largest in the world with a length of 71 meters (233 feet).[1]

Simonyi once had a Danish girlfriend who called him "skat", literally "treasure" (or "tax"), but a common term of endearment similar to "honey" in English.

The yacht can achieve a speed of 13 knots on just one engine. A cooling pump integrated into the gearboxes assures safe operation on one engine by pumping oil through the idle gearbox. The shaft of the idle engine can be disengaged, leaving the idle propeller and shaft to freewheel.