The Torpoint Ferry is a car and pedestrian chain ferry, connecting the A374 road which crosses the Hamoaze, a stretch of water at the mouth of the River Tamar, between Devonport in Plymouth and Torpoint in Cornwall. The service was established in 1791 and chain ferry operations were introduced by James Meadows Rendel in 1832. 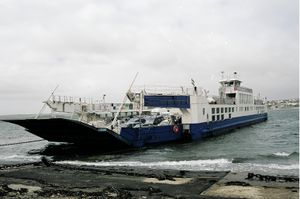 One of current ferries in 2005

The route is currently served by three ferries, named after three rivers in the area: Tamar II, Lynher II and Plym II. Each ferry carries 73 cars and operates using its own set of slipways and parallel chains, with a vehicle weight limit of 18 tonnes (20 tons) The ferry boats are propelled across the river by pulling themselves on the chains; the chains then sink to the bottom to allow shipping movements in the river. An intensive service is provided, with service frequencies ranging from every 10 minutes (3 ferries in service) at peak times, to half-hourly (1 ferry in service) at night. Services operate 24 hours a day, every day (including throughout Christmas and all other holiday periods), with service frequency never falling below half-hourly.

The ferries, along with the nearby Tamar Bridge, are operated by the Tamar Bridge and Torpoint Ferry Joint Committee, which is jointly owned by Plymouth City Council and Cornwall Council.

Tolls are payable in the Torpoint to Devonport (eastbound) direction only. The toll is £1.50 for cars and motorcycle riders are charged 30p, there is no additional charge for a pillion passenger. Frequent users can reduce the fare by half by purchasing top ups online for a machine-readable windscreen-mounted digital payment tag, called Tamar Tag, which is also usable on the bridge. The toll increase of 50% in March 2010 was the first rise for nearly 15 years.

A ferry route between Torpoint and Plymouth Dock (now called Devonport) was created by an Act of Parliament in 1790 and the Earl of Mount Edgcumbe began to run ferries the following year. In 1826 the ferry operations were taken over by the Torpoint Steamboat Company, which built landing piers on both sides of the Tamar. The company also built the steam ferry Jemima which entered service in 1831. The steamer was unable to hold a course in the strong tidal flow of the Hamoaze, so it was soon withdrawn and the older ferryboats returned to service.[1]

The steamboat company approached James Meadows Rendel in 1832 and asked him to design a steam-powered floating bridge for the route. Two ferries were built in 1834 and 1835 and provided a continuous service, operating in alternate months. The tolls varied between 2d for a horse and 5s for a coach with 4 horses, with a double fare charged on Sundays.[1]

The original ferries were replaced by two new ferries built in 1871 and 1878. As a result of increasing traffic the ferry company investigated twin ferry operation in 1905. Both the Admiralty and Devonport Corporation opposed this as the company would need to expand the landing beach in Devonport. An experimental two ferry service with the existing shore installations had to be abandoned due to the strain on the equipment. A supplementary steamer service was also introduced in 1902, with the Volta and Lady Beatrice linking Torpoint to two locations in Devonport on a triangular route.[1] 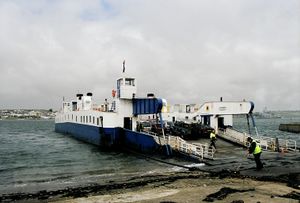 Cornwall County Council acquired both the ferry and the steamers in 1922 for £42,000. The Volta was immediately sold for breaking and two new ferries were ordered, which entered service in 1925 and 1926. These were the first ferries on the route designed to carry motor vehicles and could carry 800 passengers and 16 cars. Land was acquired on both sides of the rivers to lay a second set of chains and expand the landing beaches. A third, reserve, ferry was ordered and modern shore facilities were also built and twin-ferry operation began in July 1932. These changes made the supplementary steamer redundant and the Lady Beatrice was sold.[1]

Motor traffic using the route increased rapidly after World War II, and two new ferries with a capacity of 30 cars each were introduced by 1961. A third ferry entered service in 1966 and a marshalling area was built on the Torpoint foreshore, relieving congestion in the centre of Torpoint. The landing beaches were expanded further in 1972 allowing all 3 ferries to operate simultaneously. The three ferries were refitted in the 1980s and were stretched so that they could carry approximately 50 cars.[1] After the refit, they were named the Tamar, Lynher and Plym. These remained in service until 2005, when they were replaced by the current ferries.[2]