USS Markab (AD-21) was a Hamul-class destroyer tender named for Markab, the third-brightest star in the constellation Pegasus.

Built as the cargo ship Mormacpenn by Ingalls Shipbuilding Company of Pascagoula, Mississippi; launched 21 December 1940; acquired by the United States Navy on 2 June 1941 at Charleston, South Carolina; and commissioned as USS Markab (AK 31) on 15 June 1941 with Commander Allen D. Brown in command.

Markab operated with Atlantic amphibious forces in the Hampton Roads area until 1 October 1941. She then loaded cargo at Jersey City, New Jersey for delivery to American troops recently stationed in Greenland. Returning to Brooklyn, New York on 21 November, she took on board supplies for distribution to various bases in the Caribbean. World War II engulfed the United States before Markab steamed into Ensenada Honda, Puerto Rico, her first port of call. The new wartime demands on the Navy caused this voyage to terminate at Mobile, Alabama on 8 January 1942 where she was converted to a destroyer tender. Sixteen days later she was redesignated AD-21, but it was 27 September before Commander Brown again commanded a fully-commissioned vessel.

After shakedown Markab transited the Panama Canal on 27 October to join Destroyer Force, Pacific Fleet at Pearl Harbor. Ships recently returned from the battle for the Solomon Islands made use of her facilities for three months prior to her departure on 6 February 1943 to service the North Pacific Force. In the year she remained in the Aleutians, she rendered noteworthy service in helping to prepare vessels for both the Attu and Kiska invasions. Steaming to San Francisco late in January, 1944 the ship prepared for an even more extensive Pacific tour.

She departed the West Coast on 26 February and worked her way toward the war zone. As a part of Service Squadron 10, Markab overhauled, repaired, and replenished destroyers and destroyer escorts at Pearl Harbor, Majuro, and Eniwetok in the Marshall Islands, and Ulithi in the Carolines. Having assisted in preparing and sustaining the ships fighting in the bloody conquests of the Marianas and Iwo Jima, she sailed for the Philippines on 16 February 1945. Her work force now overhauled and readied landing craft for the assault on Okinawa. During June she played an important part in preparing TF 38 for the last great raids on Japan.

Following the Japanese surrender, Markab refitted and restocked ships bound for the occupation areas of Japan, Korea, and China. Steaming in their wake, she arrived Sasebo, Japan on 1 November and early in January 1946 joined the 7th Fleet at Shanghai, China. Her services in the western Pacific ended 2 April as Markab commenced the long voyage home for inactivation. The ship off loaded at New Orleans beginning 6 May. At Orange, Texas on January, 1947 she decommissioned and entered the Atlantic Reserve Fleet.

When the Cold War turned hot in Korea, the resultant expansion of the Navy brought the temporary reactivation of Markab. Recommissioned on 26 February 1952 with Captain Melvyn H. McCoy in command, she remained on the East Coast servicing Destroyer Force ships. Operating initially at Newport, Rhode Island and after April, 1955 at Fall River, Massachusetts, Markab also participated in the semiannual fleet exercises. On 9 February she departed on a voyage to Charleston where she decommissioned on 31 July. 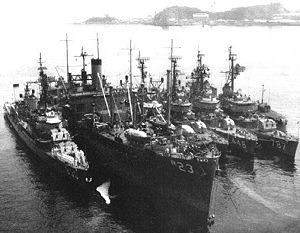 USS Markab (AR-23) at Yokosuka, Japan in 1966 with destroyers alongside. To port: the Radford, the James E. Kyes, and two unidentified destroyers; and to starboard, the Everett F. Larson.

Into a crisis-beset world she emerged again in 1960. Towed to Mare Island Navy Yard in California, she was redesignated as Repair Ship AR-23 on 15 April and recommissioned on 1 July with Captain Edwin Monroe Westbrook, Jr. in command. Homeported at Alameda Naval Air Station, the repair ship sailed to Pearl Harbor late in October, returning 22 December. Between 5 July 1962 and 14 September 1966 she projected her services even more widely, steaming three times on seven month WestPac deployments. On the first such voyage Markab returned a priceless Chinese art treasures exhibit to Taiwan. On the next two tours, ships returning from combat patrol off the coast of Vietnam increasingly required her facilities. Interspersed with the work periods in the Philippines and Japan were brief rest and rehabilitation periods at Hong Kong and Buckner Bay, Okinawa. She continued this pattern of West Coast duty and western Pacific deployment into 1969. Markab earned one campaign star for Vietnam War service.

Decommissioned again on 19 December 1969 at the Naval Inactive Ship Maintenance Facility in Vallejo, California, Markab was struck from the Naval Vessel Register on 1 September 1976. Custody was transferred to the Maritime Administration who disposed of the ship by MARAD sale 12 April 1977, her final fate unknown.