This page is about the ferry system operated by the state of Washington. Other entities operate other Ferries in Washington State

Washington State Ferries, owned and operated by the Washington State Department of Transportation, serves communities on Puget Sound and in the San Juan Islands. It is the largest fleet of passenger and automobile ferries in the United States and the third largest in the world.[1] 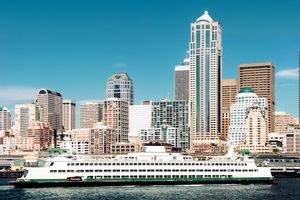 A ferry arrives in Downtown Seattle. 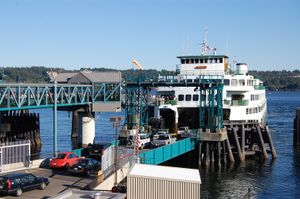 Passengers and vehicles board The Hyak in Bremerton, WA.

The ferry system has its origins in the "Mosquito Fleet", a collection of small steamer lines serving the Puget Sound area during the later part of the nineteenth century and early part of the 20th century. By the beginning of the 1930s, two lines remained: the Puget Sound Navigation Company (known as the Black Ball Line) and the Kitsap County Transportation Company. A strike in 1935 forced the KCTC to close, leaving only the Black Ball Line.[2]

Toward the end of the 1940s the Black Ball Line wanted to increase its fares, to compensate for increased wage demands from the ferry workers' unions, but the state refused to allow this, and so the Black Ball Line shut down. In 1951, the state bought substantially all of Black Ball's ferry assets for $5 million.[3] The state intended to run ferry service only until cross-sound bridges could be built, but these were never approved, and the Washington Department of Transportation runs the system to this day.[2] 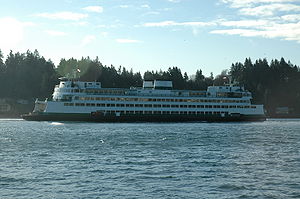 As of 2007, there are 28 ferries on Puget Sound operated by the state.[4] The largest vessels in this fleet carry up to 2500 passengers and 202 vehicles. They are painted in a distinctive white and green trim paint scheme, and feature double-ended open vehicle decks and bridges at each end so that they do not need to turn around.

Ferry classes and names are:

Nisqually with Orcas Island in the background. 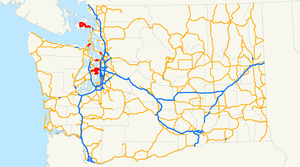 A map showing the routes operated by Washington State Ferries in comparison with state highways in Washington. Click for more detail.

Most Washington State Ferry routes are legally part of the state highway system[8], frequently with no road portion on one end or the other.

From 1993 to the early 2000s a passenger-only service ran from Bremerton to Seattle. It was shut down because of limited profitability and because of continued lawsuits of residents living on the waterway used by the ferry to prevent the high-speed ferries built for the run from running at their full speed. The slower speed made the crossing time similar or equal to the auto ferry operating on the same route, making the passenger-only service redundant.[citation needed]

The current passenger-only ferry route between Seattle and Vashon Island is designated State Route 339, with no road portion at either end. This route is no longer operated by Washington State Ferries, as responsibility was passed to the King County Marine Division in fall of 2009.

There are several other publicly operated, private, and passenger-only ferries in Washington state. 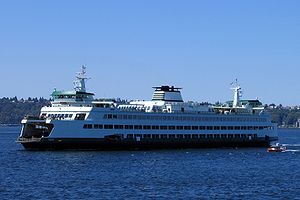