Lieutenant William McMaster Murdoch RNR (28 February 1873  – 15 April 1912) was a Scottish sailor who died on board RMS Titanic, where he was employed by the White Star Line, serving as First Officer. He is notable as the officer in charge on the bridge the night when the Titanic collided with an iceberg in the Atlantic Ocean, in which over 1,500[1] people died.

Murdoch was born in Dalbeattie in Dumfries and Galloway, Scotland, the fourth son of Captain Samuel Murdoch, a master mariner, and Jane Muirhead, six of whose children survived infancy. The Murdochs were a long and notable line of Scottish seafarers who sailed the world's oceans as early as the 19th century; William's father and grandfather were both sea captains as were four of his grandfather's brothers and it is little wonder that he followed in the family tradition.

Murdoch was educated first at the old Dalbeattie Primary School in High Street, and then at the High School in Alpine Street until he gained his diploma in 1887. Finishing schooling, he followed in the family seafaring tradition and was apprenticed for five years to William Joyce & Coy, Liverpool, but after four years (and four voyages) he was so competent that he passed his second mate's Certificate on his first attempt.

He served his apprenticeship aboard the Charles Cosworth of Liverpool, trading to the west coast of South America. From May 1895 he was First Mate on the Saint Cuthbert, which was to sink in a hurricane off Uruguay in 1897. Murdoch gained his Extra Master's Certificate at Liverpool in 1896, at the age of 23. From 1897 to 1899, he was First Officer aboard the J.Joyce & Co. steel four-masted 2,534-ton barque Lydgate, that traded from New York to Shanghai.

In 1903, Murdoch met a 29-year-old New Zealand school teacher named Ada Florence Banks enroute to England on either the Runic or the Medic. William McMaster Murdoch and Ada Florence Banks began to correspond regularly and on 2 September 1907 they were wed in Southampton at St Deny's Church.

During 1903, Murdoch finally reached the stormy and glamorous North Atlantic run as Second Officer of the new liner Arabic. His cool head, quick thinking and professional judgement averted a disaster when a ship was spotted bearing down on the Arabic out of the darkness. He overrode a command from his superior, Officer Fox, to steer hard-a-port, rushing into the wheelhouse, brushing aside the quartermaster and holding the ship on course. The two ships passed within inches of one another. Any alteration in course would have actually caused a collision.

The final stage of Murdoch's career began in May 1911, when he joined the new RMS Olympic, at 45,000 tons. Intended to outclass the Cunard ships in luxury and size Olympic needed the most experienced large-liner crew that the White Star Line could find. Captain Edward J. Smith assembled a crew that included Henry Wilde as Chief Officer, William Murdoch as First Officer, and Chief Purser Henry W. McElroy. On June 14, 1911, Olympic made her maiden voyage to New York.

The first indications of what was to come occurred on 20 September when the Olympic had her hull badly damaged in a collision with the Royal Navy cruiser HMS Hawke. Since Murdoch was at his docking-station at the stern of the ship during this collision -a highly responsible position- he found himself giving evidence in the inquiry into an incident that turned into a financial disaster for the White Star Line, as the voyage to New York had to be abandoned and the Olympic taken to Belfast for repairs, which took a good six weeks. It was thus not until 11 December 1911, that Murdoch rejoined his ship. During the time that he served aboard Olympic as First Officer (until some time in March, 1912) there were two further -though lesser- incidents, striking a sunken wreck and having to have a broken propeller replaced, and nearly running aground while leaving Belfast. However, upon reaching Southampton, he learned that he had been appointed as Chief Officer of the new Titanic, sister ship to Olympic and reputedly the largest and most luxurious ship afloat. Lightoller later remarked that "three very contented chaps" headed north to Belfast, for he had been appointed First Officer, and their friend Davy Blair was to be the new second officer. Awaiting them would be an old Adriatic hand, Joseph Groves Boxhall, as Fourth Officer, and others who would be familiar colleagues, including the now ageing Edward John Smith, as Captain, and on the verge of retirement. He is one of the members of the Murdoch family.

Murdoch, with an "ordinary master's certificate" and a reputation as a "canny and dependable man", had climbed through the ranks of the White Star Line to become one of its foremost senior officers. It was only natural that he was selected to be Titanic's Chief Officer, with 16 years of maritime experience now behind him.

Murdoch had originally been assigned as the ship's Chief Officer, though when the Titanic's skipper Edward J. Smith brought Henry Wilde, his Chief from his previous command, Murdoch was temporarily reduced to First while First Officer Charles Lightoller was in turn reduced to Second. The original Second, David Blair, would sit out the voyage altogether while the rest of the ship's complement of officers remained unchanged. 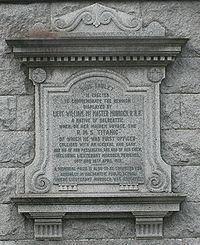 The memorial to William Murdoch in Dalbeattie.
Main article: Sinking of the RMS Titanic

Murdoch was the officer in charge at the bridge when the Titanic struck the iceberg on 14 April 1912. There are varying accounts as to what orders Murdoch gave in order to avoid collision with the iceberg. It is generally agreed that he gave an order of "Hard a'starboard" (an order which, through rotation of the ships wheel, would work to move the ship's tiller all the way to the starboard (right) side of the ship) in an attempt turn the ship to port (left). Murdoch is reported to have set the ships telegraph to "Full Astern" by Fourth Officer Joseph Boxhall, who saw them at that setting when he entered the bridge some time during the accident. Boxhall’s testimony was contradicted by Greaser Frederick Scott, who stated that the engine room telegraphs showed "Stop", and by Leading stoker Frederick Barrett who stated that the stoking indicators went from “Full” to “Stop”.[2] During or right before the collision Murdoch may have also given an order (as heard by Quartermaster Alfred Olliver when he walked onto the bridge in the middle of the collision) of "Hard a'port"[3] (moving the tiller all the way to the port (left) side turning the ship to starboard (right)) in what may have been an attempt to swing the remainder (aft section) of the ship away from the berg in a common maneuver called a "port around"[4] (this could explain Murdoch's comment to the captain "I intended to port around it"). The fact that such a maneuver was executed was supported by other crew members who testified that the stern of the ship never hit the berg.[5] Quartermaster Robert Hichens, who was at the helm, and Fourth Officer Joseph Boxhall, who may or may not have been on the bridge during the collision,[6] both stated that the last command Murdoch gave Hichens was "Hard-a-starboard!".[7][8] Despite these efforts the ship made its fatal collision at an estimated 37 seconds[9] after the berg had been sighted. The ship's starboard (right) side brushed the iceberg, buckling the hull in several places and causing rivets to pop out below the waterline, opening the first five compartments (the forward peak tank, the three forward holds and Boiler Room 6) to the sea.[10]

After the collision Murdoch was put in charge of the starboard evacuation, during which he launched 10 lifeboats, containing almost 75 percent of the total number who survived.[11] He was last seen attempting to launch Collapsible Lifeboat A. He was never seen again after Titanic disappeared into the Atlantic Ocean on the morning of 15 April 1912. His body, if recovered, was never identified. Within days of the disaster, several crew members and passengers began to speak of a suicide that occurred near the end of Titanic's sinking. It is unclear who may have committed suicide, some claiming it was Smith, Wilde, or Murdoch. Several members of the crew, including the ship's lamp trimmer, Samuel Hemming, and Second Officer Charles Lightoller said they saw Murdoch attempting to free Collapsible A from the falls on the Boat Deck just before the bridge submerged in the final stages of the sinking, when a huge wave washed him overboard into the sea.[12] Surviving wireless operator Harold Bride later stated that he saw Murdoch nearby Collapsible Lifeboat "B," but that he died in the water.

In his home town of Dalbeattie, Dumfries and Galloway, Scotland there is a memorial to his heroism and a charitable prize has been established in his name.

In both the 1996 and 1997 films, Murdoch committed suicide. The 1997 film depicted Murdoch taking — but later rejecting — a bribe from villain Caledon Hockley; and shooting two passengers (Tommy Ryan and another unidentified passenger) dead in a mob on the deck after Murdoch presumes they intend to storm one of the remaining lifeboats. Murdoch then salutes Chief Officer Henry Wilde and commits suicide by firing the pistol into his temple, his body crumpling backwards into the sea. After film producers refused to take out Murdoch's suicide scene, studio executives later flew to Murdoch's hometown to issue an apology for this depiction to his surviving relatives.[13] Surviving eyewitnesses reported that he worked diligently until the end, and was seen alive in the water after the ship went down. (See the 2nd paragraph of the "Titanic's sinking" section above.)