The Oceanic Steam Navigation Company or White Star Line of Boston Packets, more commonly known as the White Star Line, was a prominent British shipping company, today most famous for its ill-fated luxury flagship, the RMS Titanic, and the World War I loss of her sister ship, Britannic. In 1934 the line merged with its chief rival, Cunard Line, which operated as a separate entity until 2005 and is now part of Carnival Corporation & PLC.

The first company bearing the name White Star Line was founded in Liverpool, England by John Pilkington and Henry Threlfall Wilson, and focused on the U.K. - Australia trade, which had increased following the discovery of gold there. The fleet initially consisted of chartered sailing ships, RMS Tayleur, Blue Jacket, White Star, Red Jacket, Ellen, Ben Nevis, Emma, Mermaid and Iowa. The fate of Tayleur, the largest ship of its day, haunted the company for years, for it was wrecked on its maiden voyage to Australia at Lambay Island, near Ireland.[1] The company acquired its first steamship in 1863, the Royal Standard.

The original White Star Line merged with two other small lines, Black Ball and Eagle, to form a conglomerate, the Liverpool, Melbourne and Oriental Steam Navigation Company Limited. This did not prosper and White Star broke away. White Star concentrated on the Liverpool to New York service. Heavy investment in new ships was financed by borrowing, but the company's bank, the Royal Bank of Liverpool, failed in October 1867. White Star was left with an outstanding debt of £527,000, and was forced into bankruptcy.

On 18 January 1868, Thomas Ismay, a director of the National Line, purchased the house flag, trade name, and goodwill of the bankrupt company for £1,000, with the intention of operating large ships on the North Atlantic service. Ismay established the company's headquarters at Albion House, Liverpool.

Ismay was approached by Gustav Christian Schwabe, a prominent Liverpool merchant, and his nephew, shipbuilder Gustav Wilhelm Wolff, during a game of billiards. Schwabe offered to finance the new line if Ismay had his ships built by Wolff's company, Harland and Wolff. [2] Ismay agreed, and a partnership with Harland and Wolff was established. The shipbuilders received their first orders on 30 July 1869. The agreement was that Harland and Wolff would build the ships at cost plus a fixed percentage and would not build any vessels for the White Star's rivals. In 1870 William Imrie joined the managing company. As the first ship was being commissioned, Ismay formed the Oceanic Steam Navigation Company to operate the steamers under construction.

White Star began with six ships of the Oceanic class: Oceanic (I), Atlantic, Baltic, and Republic, followed by the slightly larger Celtic and Adriatic. White Star began operating again in 1871 between New York and Liverpool (with a call at Queenstown).

It has long been customary for many shipping lines to have a common theme for the names of its ships. White Star gave its ships names ending in -ic, such as Titanic. The line also adopted a buff-coloured funnel with a black top as a distinguishing feature for its ships, as well as its distinctive house flag, a red broad pennant with two tails, bearing a white five-pointed star.

The company suffered a massive early disaster in 1873 with the sinking of the SS Atlantic and the loss of 535 lives near Halifax, Nova Scotia. The crew were blamed for serious navigational errors by the Canadian Inquiry, although a British Board of Trade investigation cleared the company itself of wrongdoing.[3]

During the late nineteenth century, White Star operated many famous ships, such as Britannic (I), Germanic, Teutonic, and Majestic (I). Several of these ships took the Blue Riband, awarded to the fastest ship to make the Atlantic crossing.

In 1899 Thomas Ismay commissioned one of the most beautiful steam ships constructed during the nineteenth century, the Oceanic (II). She was the first ship to exceed the Great Eastern in length (although not tonnage). The building of this ship marked White Star's departure from competition in speed with its rivals. Thereafter White Star concentrated on comfort and economy of operation instead.

In the late nineteenth century, shipbuilders had discovered that when speed through water increased above about 20 knots (23 mph; 37 km/h), the required additional engine power increased in logarithmic proportion: that is, each additional increment of speed required a larger increase in engine power and fuel consumption. With the coal-fired reciprocating steam engines of the time, exceeding about 24 knots (28 mph; 44 km/h) required very high power and fuel consumption. 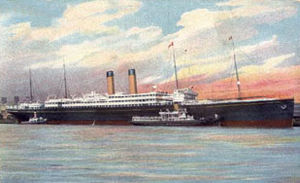 Between 1901 and 1907, White Star brought "The Big Four" (all around 24,000 tons) into service: Celtic, Cedric, Baltic, and Adriatic. These ships carried massive numbers of passengers: 400 passengers in First and Second Class, and over 2,000 in Third Class. In addition, they had extremely large cargo capacities, up to 17,000 tons of general cargo.

In 1902 the White Star Line was absorbed into the International Mercantile Marine Co. (IMM), a large American shipping conglomerate. Bruce Ismay ceded control to IMM in the face of intense pressure from shareholders and J. P. Morgan, who threatened a rate war. IMM was dissolved in 1932.

The White Star Line and immigration

In the late nineteenth and early twentieth century, millions of people immigrated to the United States and Canada. White Star was among the first shipping lines to have passenger ships with less expensive accommodation for Third Class passengers, in addition to First and Second Class. The Oceanic-class liners of 1870-1872 carried up to 1,000 Third Class passengers. The "Big Four" of 1901-1907 all carried over 2,000 Third Class passengers. White Star advertised extensively for immigrant passengers. When the White Star Line began operations in 1870, the majority of their place in the immigrant trade was centered in Great Britain, with Irish immigrants being a chief source of income for much of the company's history. From the start, a great deal of their business also came from Scandinavia, with Norway and Sweden being the largest areas of success. No exact figures are available, but White Star liners may have carried as many as two million immigrants. As a clever means of competing with Cunard (which had faster ships), White Star gave its Third Class facilities modest luxuries. These included dining rooms which featured linens and silverware; menu cards had postcards of the back, so that immigrants would write to relatives back home and tell them to travel with White Star.

The Cunard Line was the chief competitor to White Star. In response to Cunard's Lusitania and Mauretania, White Star ordered the Olympic class liners: Olympic, Titanic, and Britannic. While Cunard was famed for the speed of its ships, the Olympic class were to be the biggest and most luxurious ships in the world. Britannic was originally named Gigantic; her name was changed shortly after the sinking of Titanic.[4] The Olympic was the only ship of this class that was profitable for White Star. Titanic sank on her maiden voyage, while Britannic was requisitioned by the British government before she was fully fitted, and used as a hospital ship during World War I. Britannic sank after hitting a mine on November 21, 1916. 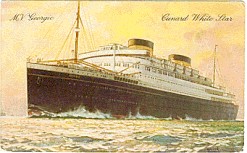 In 1927 the White Star Line was purchased by the Royal Mail Steam Packet Company (RMSPC), making RMSPC the largest shipping group in the world.[5][6]

In 1928 a new Oceanic (III) was proposed and her keel was laid down that year at Harland and Wolff, but the ship was never completed. She was to have the new diesel-electric propulsion system and maintain the thousand foot dimensions that had originally been planned for Gigantic and the unbuilt Ceric (1913). Oceanic's keel was dismantled and the steel was used in two new smaller ships built for the White Star: RMS Georgic and RMS Britannic (II). Both of these ships entered service in 1930; they were the last liners White Star built.

RMSPC ran into financial trouble, and was liquidated in 1932. A new company, Royal Mail Lines Limited, took over the ships of RMSPC and its subordinate lines including White Star.[7]

In 1933 White Star and Cunard were both in serious financial difficulties because of the Great Depression, falling passenger numbers and the advanced age of their fleets. Work had been halted on Cunard's new giant, Hull 534 (later the Queen Mary), in 1931, to save money. In 1933 the British government agreed to provide assistance to the two competitors on the condition that they merge. The agreement was completed on 30 December 1933.

The merger took place on 10 May 1934, creating Cunard White Star Limited. White Star contributed 10 ships to the new company while Cunard contributed 15 ships. Because of this, and since Hull 534 was Cunard's ship, 62% of the company was owned by Cunard's shareholders and 38% of the company was owned by White Star's shareholders. A year after this merger, Olympic, the last of her class, was removed from service. Two years later, in 1937, she was scrapped.

In 1947 Cunard acquired the 38% of Cunard White Star it did not already own, and on 31 December 1949 it acquired Cunard White Star's assets and operations, and reverted to using the name "Cunard." From the time of the 1934 merger, the house flags of both lines had been flown on all its ships, with each ship flying the flag of its original owner above the other. After 1950, only Georgic[8] and Britannic,[9] the last surviving White Star liners, continued to fly the White Star burgee on a regular basis above the Cunard house flag.[10] All other ships flew the Cunard flag over the White Star flag until 1968.

The White Star Line's London offices, named Oceanic House, still exist today. They are just a block off Trafalgar Square, and one can still see the name on the building over the entrances.

The French passenger tender Nomadic, the last surviving vessel of the White Star Line, was purchased by the Northern Ireland Department for Social Development in January 2006. She has since been returned to Belfast, where she is to be restored under the auspices of the Nomadic Preservation Trust along with the assistance of her original builders, Harland and Wolff. She is intended to serve as the centerpiece of a museum dedicated to the history of Atlantic steam, the White Star Line, and its most famous ship, the Titanic. Also, the Cunard Line has introduced the White Star Service as the name of the brand of services on its ships RMS Queen Mary 2, MS Queen Victoria, and the future MS Queen Elizabeth. The company has also created the White Star Academy, an in-house programme for preparing new crew members for Cunard ships.

The White Star flag is raised on the Queens on every 15 April, in memory of the Titanic disaster.