The Woolston Floating Bridge crossing the River Itchen shortly before it was taken out of service seen from the Itchen Bridge, the permanent concrete structure that replaced it. 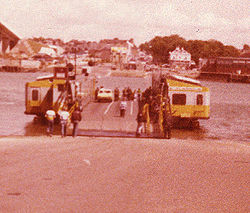 The Woolston Floating Bridge embarking passengers on the Southampton side of the River Itchen.

The Woolston Floating Bridge, was a cable ferry that crossed the River Itchen in England between Woolston and Southampton from 23 November 1836[1][2] until 11 June 1977[3]. It was taken out of service when the new Itchen Bridge was opened.

By 1977 these ferries were operating side by side during the day and reducing to a single ferry late in the evening. There was a bus terminus at either side of the crossing, connecting foot passengers with the centre of Southampton and the road to Portsmouth.

The last Woolston ferry, No. 14, was a self-propelled pontoon that hauled itself across the river on cables, i.e. a cable ferry. there was no bridge number 13, for superstitious reasons.

When first introduced in 1838, the Floating Bridge took the form of a chain ferry powered by steam engines mounted on the shore [1]. The ferry was designed by engineer James Meadows Rendel[1].

Floating Bridge No. 3 was built by Joseph Hodkinson in 1862[5]. Steam engines were mounted on-board.

By 1880, the ferry was still using chains to draw itself over the Itchen [6]. Cables are first seen in pictures of Floating Bridge No. 7, built in 1892 by Day, Summers and Co[7]. This particular ferry sank in 1928, but was salvaged.

Floating Bridge No. 10 and all subsequent versions were powered by diesel engines[5].

The Floating Bridge was technically called the Woolston ferry during its 141 years of operation[1].

Floating Bridge is an affectionate description of the technology rather than the name of the crossing itself. The term was first used by the engineer James Meadows Rendel, who had previously implemented a similar design of chain ferry at Torpoint and at Dartmouth in Cornwall. The same technology was applied to create the Gosport Ferry in 1840[8]

No variant of the ferry took the form of a pontoon bridge spanning the whole width of the crossing, to which the term Floating Bridge is more widely applied and thought of today.

Nevertheless, the term Floating Bridge has been commonly used in Southampton and it is still in use today, more than 30 years after the Woolston ferry was taken out of service. The terminology was immortalised in the 1956 painting entitled "The Floating Bridge" by L. S. Lowry[9]

This use of the term Floating Bridge has also been applied to the Cowes Floating Bridge, which still provides a similar service in a similar situation just a few miles away, on the River Medina in Cowes on the Isle of Wight.

In 1820, whilst the crossing was still served by the small boats of Itchen Ferry village, a toll house was built [10]. This became a Coffee Tavern when the new ticket office was built for the new 'Floating Bridge' in 1836[10]. The old toll-house / Coffee Tavern building survived until 1970. The Ticket Office was demolished in 1954.[10].

Impact on the Area

St Johns Road in Hedge End was specifically constructed, starting in 1839, to serve the new Floating Bridge[11]. This project was initiated by four of the proprietors of the new Floating Bridge company, including James Warner the Younger of Botley, Hampshire and was undertaken at their own expense[11]. There was competition between the Floating Bridge and the Northam Bridge[11], with at the time was also a toll bridge[11]. By building a new road that linked the hamlet of Hedge End to the existing Portsmouth Road at Sholing, the proprietors of the Floating Bridge company were able to poach some of the passengers that would otherwise be forced to use Northam Bridge[11]. This new road, cut through Botley Common and Netley Common[11]. The inevitable further development alongside that new road further eroded the common land, and helped the hamlet of Hedge End to fully establish itself as a village in its own right.

If you are ever up in Sholing and you want to go to town,

Oh, the Woolston ferry doesn't travel very fast,
It was never built for comfort, it was built to last.