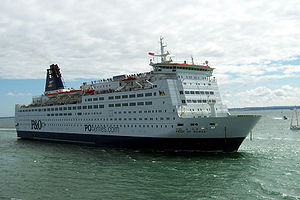 Pride of Bilbao (ex Olympia), an archetypical cruiseferry. Built for Rederi AB Slite for the Baltic cruise market and now operated by P&O Ferries between Portsmouth in the UK and Bilbao in the Basque Country.

A cruiseferry is a ship that combines the features of a cruise ship with a Ro-Pax ferry. Many passengers travel with the ships for the cruise experience, staying only a few hours at the destination port or not leaving the ship at all, while others use the ships as means of transportation.

Cruiseferry traffic is mainly concentrated in the seas of Northern Europe, especially the Baltic Sea and the North Sea. However, similar ships traffic across the English Channel as well as the Irish Sea, Mediterranean and even on the North Atlantic. Cruiseferries also operate from China and Australia. 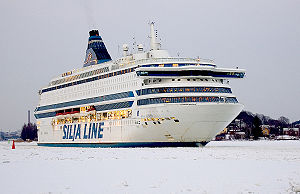 In the northern Baltic Sea, two major rival companies, Viking Line and Silja Line, have for decades competed on the routes between Turku and Helsinki in Finland and Sweden's capital Stockholm. Since the 1990s Tallink has also risen as a notable company in the area, culminating with acquisition of Silja Line in 2006.

The term "cruiseferry" did not come into use until the 1980s, although it has been retroactively applied to earlier ferries that have large cabin capabilities and public spaces in addition to their car- and passenger-carrying capacity. [citation needed]

This list is incomplete; you can help by expanding it.