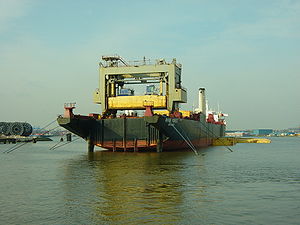 MV Rhine Forest in the Port of Rotterdam

The lighter aboard ship (LASH) system refers to the practice of loading barges (lighters) aboard a larger vessel for transport. It was developed in response to a need to transport lighters, a type of unpowered barge, between inland waterways separated by open seas. Lighters are typically towed or pushed around harbors, canals or rivers and cannot be relocated under their own power. The carrier ships are known variously as LASH carriers, barge carriers, kangaroo ships or lighter transport ships.[1]

By the 1950s, the needs of cargo transport customers were no longer being met by the old system of loading individual cargo pieces into a ship's hold. The dimensions and shapes of cargo pieces varied widely, and the ISO standard cargo container had only slowly begun to be adopted during the 1960s. Large container terminals with extensive conveyor systems and storage areas were still only in planning or in the development stages.

The LASH system was developed as an alternative and supplement to the developing container system. The lighters, which may be characterized as floating cargo containers, served dual purposes: transportation over water, and the establishment of a modular, standardized shape for loading and unloading cargo. The lighters, also known as swimming normed cargo containers, are loaded onto a LASH carrier at the port of embarkation and unloaded from the ship at the port of destination.

The system was developed by the American shipbuilding engineer Jerome Goldman during the 1960s. The Acadia Forest, commissioned in September 1969, was the first LASH carrier. The ship could take up 75 standardized lighters, with about 376 metric tons of total loading capacity. At the time, it was a novel kind of ship, the first vessel designed primarily to transport other, smaller ships.

At the time of its invention, the system was considered by experts to be a considerable advancement in shipping technology. LASH carriers were able to transport 5 times more cargo than a comparable conventional transport ship, the loading and unloading process was much more efficient, and a lack of harbor equipment or quay moorings provided no obstacle, as the lighters could be loaded directly onto the ship. The system also relieved the pressure to unload as quickly as possible, since the lighters already in the water could be moved while others were being unloaded. All told, these ships spent more than 80% of their annual application time at sea, whereas the conventional ships often lay at harbor for as much as half the year.

LASH barges are loaded at inland river and shallow ports. Then, the barges are towed to ocean port's fleeting areas to meet the LASH mother vessel. On arrival, the mother vessel crane lifts the LASH barges onto the ships. LASH cargo does not require transshipment, as the movement from the origin to destination takes place with a single bill of loading.

An important technical problem raised by the invention of the new transport system was the shape of the lighters. Several other designs, differentiated mainly by the shape of the lighters and the loading mechanism, were proposed, but the LASH system found the largest range of applications. In this approach, the lighters were individually lifted onto the carrier ship by a large crane located at the stern of the ship. The crane could move the entire length of the ship and stack the lighters atop each other in the ship's body and on the deck. The cranes had a load-carrying capacity of more than 500 Mp. Loading or unloading a lighter took on average 15 minutes. LASH ships were constructed in Europe, Japan and the USA with almost uniform parameters.

The host vessel is sometimes purpose-built or modified with a door at the waterline, to allow the payloads to be loaded and unloaded without special lifting equipment. An example would be the LASH Turkiye, built at Avondale Shipyard for the Republic of Turkey.

Another related system was the Sea Bee, which had a lifting system located at the stern of the carrier ship. The lift, known as a "Syncrolift" was a platform that could be lowered below the water surface. Two lighters weighing up to 1000 metric tons are maneuvered onto the now-underwater platform and raised to the height of the deck, where special rails engage and transport the lighters down the length of the ship to their berthings. The lighters used in the Sea Bee system are considerably larger than the LASH lighter, and the loading hardware is also stronger, with a lifting force of more than 2000 Mp.

The first ship of a series of three Sea Bee ships was the SS Doctor Lykes, followed by the SS Almeria Lykes and SS Tillie Lykes all of which were operated by Lykes Brothers Steamship Company. The "Sea Bee" vessels had three decks and could transport 38 lighters (12 on the lower decks and 14 on the upper deck). The dual function of the ship is noteworthy, as it had storage tanks with a capacity of nearly 36000 m³ volume built into its sides and unusually large double hull, allowing it to be used also as a product tanker.

A Danish project with the name BACAT (Barge-Catamaran) was introduced at the end of 1973. It was used for the transport of several hundred thousand metric tons of load between northern Europe and Great Britain. The system was similar to the Sea Bee, but the lighters were smaller and had an individual load-carrying capacity of only 140 tons.

New problems which were as yet unknown to shipping companies arose with the advent of the LASH system and similar barge carriers. Aboard the carrier ship the lighter is simply a large cargo container, but in the seaport and on the inland waterways it becomes a vessel. As a vessel, they are subject to requirements for equipment regulations like anchors, winches, coupling had to be provided so-called "head barges" which could not be transported on the carrier ships. Also, serving waterways which freeze over in winter required a high capital expenditure.

Studies showed that the costs of addressing these issues, along with the costs of operating the carrier ships and her lighters, were much higher the customary freighter ships or the ISO-compliant container ships that were beginning to conquer the transportation market. While barge carriers and lighters are a technologically interesting sea transport system, they are economic only under certain specific conditions of traffic and economy. [2]

On the 15th December 2007 the Rhine Forest[3], ex Bilderdijk of the Holland-Amerika Line entered for the last time the Port of Rotterdam, where it was retired due to low utilization between New Orleans and Rotterdam. It is a sister ship of MV München. The LASH lighter with registration p. CG 6013 was donated to De Binnenvaart, an inland-shipping museum in Dordrecht, where it is now part of an exhibit.